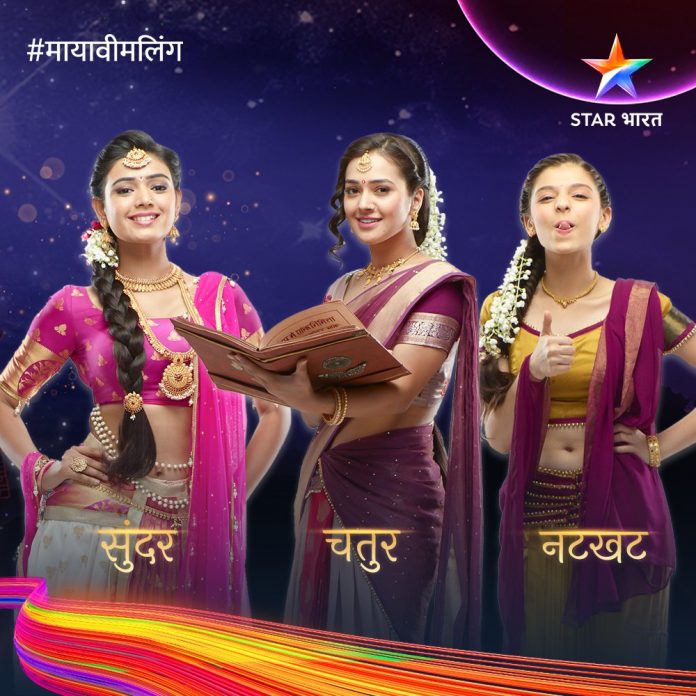 Pranali and Garima question Angad on his absence. Pranali sends Garima, on seeing Angad getting upset. Eshwarya gets decked up to meet Chegu, while her mum thinks she is going to meet Adhivanth. Eshwarya thanks her for approving her choice. Her mum assures that she will talk to Shil Aditya soon. She asks Eshwarya to wait for her lover. Eshwarya tells her that she will just rush and meet him. She promises of not forgetting Maling’s pride. Angad tells Pranali to feel proud to get such a husband, who is more like her slave. She tells him that she lost the potion. He denies to know anything about it. Angad breaks their romantic moment and troubles her. Eshwarya runs to meet Chegu. She realizes that she dropped her earring on the way. Dharani gets the earring and looks for her. Eshwarya realizes her love for Chegu.

Chegu meets her and confesses love to her. She tells him that she has made her mind about accepting his love. Eshwarya and Chegu have a romantic moment. Eshwarya pulls his leg. Dharani sees Adhivanth in the palace and gets mistaken. She tries to see if Eshwarya reached Adhivanth or not. Shil Aditya tells her that something wrong is happening with them, Pranali is in trouble, Angad can’t be trusted, Pranali and Angad’s relation can’t form. Dharani asks Shil Aditya to allow Eshwarya and Adhivanth’s marriage, but he refuses for having another relation with Mahapuram. She asks him if he finds anyone else suitable for Eshwarya. He asks her not to rush. She tells him that Eshwarya can fall in love with any wrong person and then they would have to regret. She cautions him about Chegu and Eshwarya’s friendship.

Shil Aditya gets a shock. Eshwarya and Chegu spend some time at the lake side. He gets surprised when she tells him that Dharani agrees for their alliance. Dharani doesn’t want Chegu and Eshwarya’s marriage to happen. She tells Shil Aditya that Eshwarya can get mistaken about the friendship. She reveals that she has taken Eshwarya’s consent for Adhivanth’s alliance. Eshwarya proposes Chegu for marriage. She asks him to invite Antara to Maling for their marriage alliance. Dharani meets Adhivanth and learns that Eshwarya isn’t with him. Dharani lies to Adhivanth and understands that Eshwarya is with Chegu. Angad tells Madhumali about Haran. They think about the potion secret. Angad washes his hands with the potion to know its effect. Madhumali asks him not to take any big risk. Angad likes the magical potion effects. Shil Aditya learns that the potion is stolen and gets sure that Angad is behind the conspiracy.