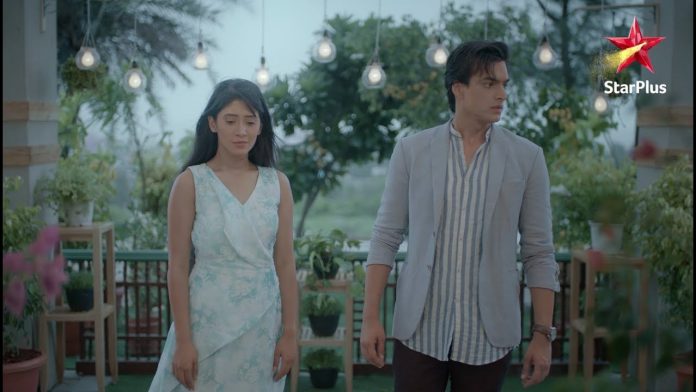 Naira calls up Kartik to get her phone back. Surekha feels sorry to misbehave with the elders. She doesn’t know how to end her fears. She wants Dadi to understand and be concerned for Mansi. She wants Mansi to get settled, as Mansi’s past isn’t clean. She fears that Mansi will not be accepted by the society. Kartik meets Naira and returns her phone. He asks her if she wants to tell something. She asks him why did he enquire about Anmol when she told him about Anmol’s reformation. He tells her that he has to confirm things about Anmol as he has concern for Mansi. She asks him why did he not trust her. They both argue over having trust issues. He tells her that he is Mansi’s brother and its his duty to verify about Anmol’s background before thinking of taking the alliance ahead. He asks her why is she creating an issue if his way of verifying is different.

She tells him that she expected him to believe her. He states that he didn’t do anything wrong. He tells her that he can’t help her if she raised an objection. He questions her about Shubham. She asks him how long will he hurt her by taunting about Shubham. He tells her that she is responsible for Shubham’s death. She tells him that she wanted to save Shubham, she didn’t intend him to lose his life. She asks him to trust her.

He tells her that he doesn’t trust her. They both remind their trust issues. They have an altercation about their past. He tells her that she has killed Shubham, and he can never get rid of this burden. He doesn’t want to change his decision. He tells her that divorce is right for them, as they have no trust left in their relation. He asks her to sign on the divorce papers without a second though. They both hurt each other by their harsh words. They get stuck in the storm and angrily part ways.

Elsewhere, Kirti asks Naksh to have hope, Anmol and Mansi’s relation will form, and even Kartik and Naira will change their decision. Naksh gets happy with her hopeful mindset. Kirti gives him courage. Naira returns home with an upset face. She tries to hide her sorrow from everyone.

Naira asks Rukmani to decide for Anmol and keep her away from the matters. Kartik too doesn’t want to get involved in Mansi’s alliance, being angry on Naira. He hides his tears from Mansi. Mansi tells him that only if Naira was with him, her alliance would have got possible. He tells her that he can’t reconcile with Naira, as she is Suwarna’s culprit as well. She tells him that she won’t marry Anmol if he doesn’t forgive Naira. She asks him to bond with Naira, as Naira is still related to him. He tells her that his divorce is finalized. Naitik and Naksh try to cheer up Naira.

Naitik asks her to try some random things to get a break from her thoughts. She asks Naira not to think about her divorce. Naksh shows Naira’s childhood pictures and brings a smile on her face. Kartik gets the fresh divorce papers and signs on them. Suwarna supports him. Manish worries for Kartik, who is just concealing his sorrow. Surekha asks the family to speak to Anmol’s parents and fix the alliance. Kartik tells Dadi that he will come along. Suwarna fears that Kartik will meet Naira again. She stops Kartik from meeting Naira and Singhanias. Kartik tells her that he wants to go for Mansi’s sake, he doesn’t have any other thought in mind.