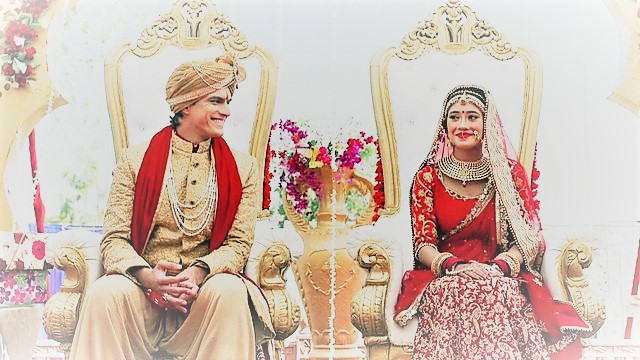 Another shocker in YRKKH: Naira to smash Kartik’s wedding dreams… Kartik and Naira decide to get married. They take blessings from the families by hiding their decision of re-marriage. They secretly plan everything. Kartik talks to the pandit. Kartik just informs Suwarna that he is going to marry Naira. Suwarna blesses him and gives him a sindoor box. She asks him to tell Naira that this sindoor is her blessing. Kartik gets happy that Suwarna has finally cleared her heart for Naira and accepted her.

Meanwhile, Goenkas wait for Kartik at the airport, while Kartik flees to marry Naira. Manish and Dadi try to call Kartik. Suwarna keeps silence and prays for Kartik’s happiness. Dadi learns that Kartik has already left. She gets worried.

Kartik calls Naira at the temple. He awaits her. She doesn’t answer his call. He realizes that Naira has left from her house, but didn’t reach him. He gets thinking if Naira is fine or not, if Naira is stuck in any problem. He was sure of her coming.

He gets negative thoughts in mind. Kartik takes a cab and tries hard to reach Naira. He falls breathless while he attempts to hear Naira’s voice once. He gets bad omens and really panics. He doesn’t want any bad happening. He asks people if they have seen Naira. He doesn’t know where Naira has gone. He thinks she has met with an accident, or maybe her family is in some problem. He tries to know if any accident happened nearby.

Kartik thinks once the wedding happens, everything will get fine for Naira and him, even if elders scold them, elders can’t separate them. Kartik doesn’t know that Naira has backed out of the wedding. Kartik gets mad in tension. He reaches Singhania house to know about Naira. He finds Naira fine and calm, talking to Kirti and family. He gets happy seeing her fine. His negative thoughts around her safety get cleared. He then wonders why didn’t she come when she is fine. He asks Naira why didn’t she come to the temple.

Naira doesn’t react on meeting him, and tries to avoid the wedding talk. He loses his temper and questions her about changing her decision. He doesn’t care for anyone watching and fights with Naira for not keeping the promise. He gets a big shock when she refuses to marry him. He doesn’t know why did Naira suddenly change her mind, since she also loves him a lot and can’t live without her. He tries to get answers from her. When she doesn’t answer, he gets shouting on Naira. Singhanias learn the matter that Kartik and Naira were eloping to marry.

They get disappointed with Naira. They oppose Kartik and ask him to not meet Naira again. Kartik has solved Suwarna’s misunderstanding about Shubham’s death. He got Naira accepted by Suwarna. Kartik hoped that Naira will surely come for the wedding. He doesn’t know what stopped Naira from keeping their love vows. A new misunderstanding gets created between them in YRKKH.

Naira sheds tears in loneliness. She knows she has done wrong with Kartik by breaking his dreams, but feels helpless as she had to do this for the betterment of his own family. She feels Kartik has a right to know the reason for her refusal, but things will get worse if she speaks up. Rajshri goes to her support. Rajshri knows Kartik and Naira’s true love. She asks Naira about her refusal for weddding. Naira justifies herself as she had to break Kartik’s dreams for a reason. She doesn’t share anything with Rajshri. Rajshri understands her pain. She wishes Kartik and Naira’s re-union for the sake of their happiness. She gives some time to Naira so that she calms herself. Rajshri asks Naira not to take any decisions in haste and think well, so that Naira unites for Kartik forever this time.