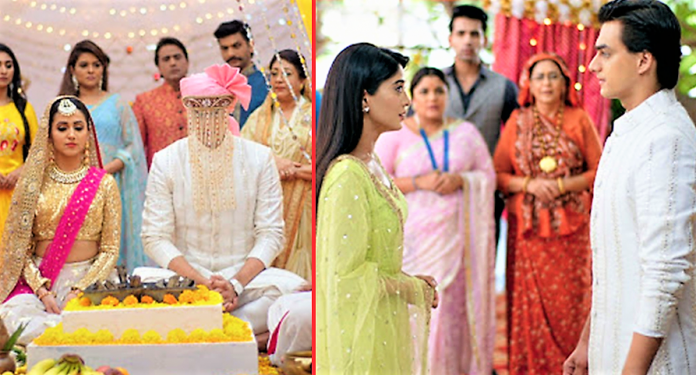 YRKKH: Drama Galore in Kartik and Ashi’s marriage… Kartik throws a big challenge for Naira and hurts her heart unknowingly. He asks her to attend his wedding and witness the rituals, if she has got completely over his love and memories. He tries hard to rekindle their love, hiding in her heart. He wants to explain her that no matter how big the problem it, they can together solve it, she can’t snatch his rights and decide for his life all alone. The mystery gets revealed, that Kartik has learnt Naira’s illness truth from Suwarna and made the plan to make Naira realize her mistake of sacrificing her love. He gets Ashi in his plan to mock the marriage only to open Naira’s eyes. He doesn’t want Naira to stay in fear that she is gifting him sorrow for life by marrying him. Kartik wants to earnestly try and make up for his past mistakes. He has got Suwarna on his side this time.

Suwarna also cleared her heart for Naira and wants to take care of Naira in the bad phase of her illness. Suwarna doesn’t repeat the ‘concealing’ mistake which she hates the most. She doesn’t hide anything from Kartik, since she knows Kartik will never accept this decision if he learns from external sources. Suwarna and Kartik team up to make Naira rectify her mistake. Suwarna wants Naira to marry Kartik in the same mandap, where Kartik mocked to marry Ashi. Kartik awaits Naira in the mandap and gets anxious to see her. Naira does the unthinkable and tells Naitik that she wants Kartik to move on, she will surely attend his marriage. She stays firm on her decision.

Naitik advises her not to go, but she asks him to support her for the sake of Kartik’s good future with Ashi. Naitik, Naksh and family support Naira in the tough endeavour and arrive at Kartik’s wedding. Naira sees Kartik with Ashi in the mandap and gets much heartbroken. She goes on sacrificing her love and wants him to be happy. She gives her best wishes to Kartik and Ashi, and asks them to get married. Kartik asks Naira if she isn’t recollecting their marriage or the memories not pounding in her mind. Naira gets speechless. He instigates her to accept that she loves him. Kartik’s anger reaches a peak, where in he compels Naira to marry him, nevertheless of her illness and stupid sacrifice.

Naira witnesses the marriage going on, and faints down. The families get worried and rush her to the hospital. When Naira wakes up in the hospital ward, she finds Kartik with Ashi and everyone. Naira breaks down by the thought of losing Kartik forever. Naira asks him about Ashi’s marriage. He tells her that Ashi has married her lover Karan. Kartik introduces Ashi and her groom Karan. Naira congratulates Ashi and Karan. Naira didn’t knew that the marriage is just a drama. The families reveal that they were also with Kartik in this plan. Kartik tells Naira that Suwarna has already told him everything, and he has made this plan by involving both the families. He just wanted to hear the truth from Naira. He holds ears and apologizes.

Kartik and Naira have a big union. Kartik apologizes to Naira for mocking the marriage only to make her accept his love. Kartik tells her that he knows about her illness, which isn’t bigger than their love. He tells her that they will together fight with her illness and defeat it. The moment of their union finally comes. Naira will battle for life with Kartik’s support and strength. Naira finally gets Kartik. They have an emotional union. Naira explains her why she decided to keep him away, only for his betterment. Kartik asks her to forget everything now. He gets sweets for her and feeds her, giving the good news that he will marry her with the families’ consent. KaiRa’s Maha Milan will be seen. Kartik tells her that he will never leave her, till the last breath of his life. They hug and cry. Their families bless them and their true love.

What do you think about KaiRa’s unexpected marriage twist in YRKKH? Keep reading for more on YRKKH.