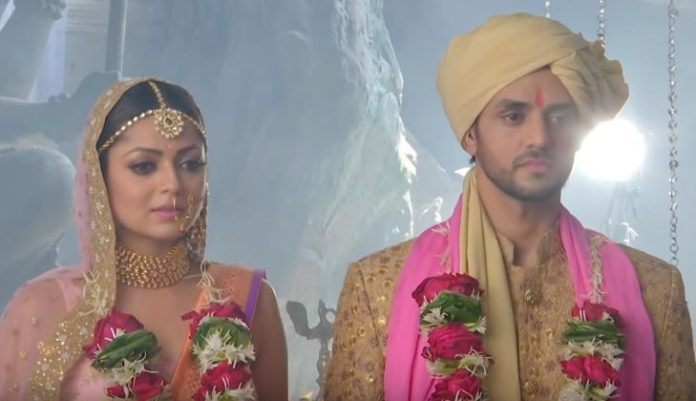 Silsila: Mauli’s reaction on Kunal-Nandini’s happy marriage.. Kunal breaks all ties with Mauli. This gets shocking for Mauli and family. Kunal proves once again that he doesn’t deserve Mauli. He ruins Mauli’s Karwachauth fast by reprimanding her. Kunal completes Nandini’s fast by surprising her. He decides to marry her. They have romantic moments. He also tells her that he can’t wait to marry her. He wants to make her his wife as soon as possible, before any hurdle comes in his way. Consequently, Kunal and Nandini get married. They exchange the marriage vows. Kunal has forever accepted Nandini. He fills sindoor in her hairline. He makes her have the mangalsutra. They turn into life partners. Nandini gets too happy to finally become Kunal’s wife.

She wanted to get rid of the lover’s tag. Kunal’s dream also turns true when he marries the second lover. Strangely, he was also in love with Mauli when he had a love marriage with her. Kunal’s second love marriage also brings happiness for him.

Furthermore, Kunal promises Nandini that he will just love her, the same way as he had promised Nandini. Kunal and Nandini turn into husband and wife, in the marriage ceremony conducted in private. Kunal has hurriedly married Nandini, after assuming that Mauli isn’t pregnant.

He feels cheated by Mauli’s life. Kunal breaks his old relation. He gives Mauli’s share of happiness to Nandini. Kunal and Nandini romance. They start having cute antics once they turn into a married couple. Kunal tells her that he will love the same way as before, he won’t throw any husband’s tantrums. He promises to become a good husband. He wants to clear all her bad memories. Nandini gets on cloud nine. Meanwhile, Mauli learns about Kunal and Nandini’s marriage. Mauli breaks down. She gets support from Yamini and Dida. She removes her Suhaagan bangles. She doesn’t want to have any relation which weakens her further. She wants to raise her child all alone.

Also, she feels Kunal doesn’t care for her now. She tells them that Kunal was too happy when he learnt that he isn’t becoming a father. She doesn’t want to cage Kunal because of the coming child. Mauli makes a sacrifice for Kunal and Nandini. Mauli has decided to leave Kunal forever. She shares the truth with Dida and Yamini. They share the sorrow. They support Mauli and wants to raise the child without Kunal. Dida and Yamini decide that they won’t accept Nandini as Kunal’s wife ever. There will be a short leap in the show.