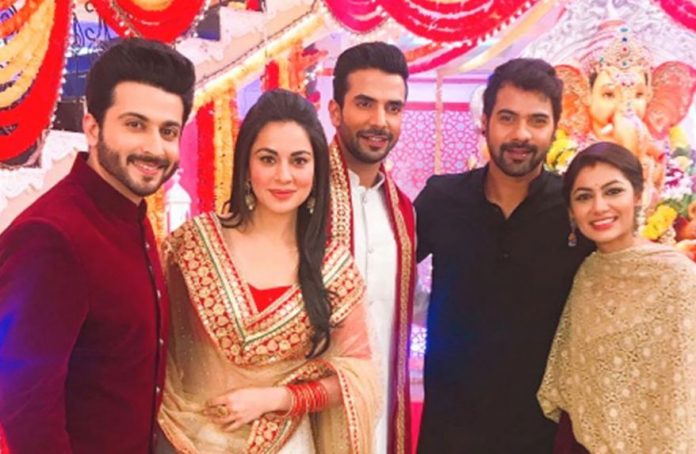 Kumkum Bhagya: Pragya thinks how to hide Kiara’s truth from Abhi as they all will be in the same house. She thinks how to tell the truth. Also, she ponders that Kiara will not agree if she isn’t taken to Abhi’s family. King and his family come to Mehra’s house for Diwali celebration. Tanu hugs Abhi and her earring gets stuck to his shirt. King teases them saying we thought to wish Abhi happy Diwali, but his wife is not leaving him. He asks if the romance is over. He pulls Abhi’s leg and calls him for some bromance with his friends. Abhi helps Tanu to get rid of her soon.

But, suddenly he stumbles and falls on Pragya and accidentally keeps his hand on the Kumkum plate. He asks Pragya if she is fine and keeps the hand on her forehead. The magical moment of Kumkum brings them closer. Kumkum gets applied to her forehead. Abhi sees Pragya having Kumkum on her maang with his hand and gets surprised. King gets upset seeing this. He wants to know their entire story.

Karan tells Preeta that Prithvi is following him. Preeta doesn’t believe him and asks him to come to the tea stall. Sameer misunderstands Rishabh and Shristi and asks them if they are having an affair. Rishabh and Shristi are shocked and tell that he is misunderstanding them. Prithvi manages to fool Preeta again. Karan tells her that the day when he gets proofs against Prithvi, he will make him away from her life. He waits for the proofs. Karan conspires to expose him in front of everyone. Preeta realizes Karan’s concern and love for her. Karan decides to express his feelings for Preeta openly. Will Karan strike the romantic moment? Keep reading.