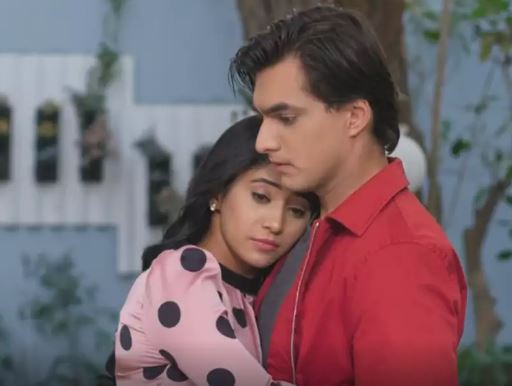 Yeh Rishta: Kartik-Naira to face a threatening situation.. Kartik and Naira confront Samarth for his evil motives. They get doubtful that Samarth is the person who is breaking their house peace. They realize how much Samarth hates them, when they get a clue of Samarth’s craze. Kartik wants to put a stop to Samarth’s evil. Samarth has come to Goenka family as the Raavan who would burn their happiness, unity and love. He feels he is the supreme. Samarth tells Kartik that he isn’t young or poor to lose out to Goenkas now. He wants to give it back to Goenkas, who have snatched everything from him, including his happy childhood.

Samarth doesn’t have an idea about the past in total. He follows the wrong path by believing what was put in his ears by his parents. Samarth now wants revenge. He openly declares a war against the Goenkas, despite being a Goenka himself. Samarth doesn’t want to pity anyone. He has gone through a lot of pain, which gets expressed by his verbal rage.

Kartik and Naira realize what Samarth has suffered in the past because of the big family issues. They want to revive the love in his heart. They also challenge Samarth that they will be awakening his hidden love and feelings for the family, and change his hatred into love. Kartik and Naira are sure that their love can melt any stone. Samarth warns them to stop them from coming between his motives. He doesn’t want to hurt Kartik and Naira, but tells them that he won’t back off at any cost, even if he has to knock down whoever comes in his way. Samarth gets threatening their lives to keep them away.

Kartik decides to confront Manish and Dadi to know the entire past chapter, so that he can fight with Samarth’s evil. Lav and Kush’s birthday party will be seen. Kartik and Naira plan to send Samarth to jail. Samarth tries to show off his plan working. Kartik and Naira make sure that Samarth’s plan fails. Police arrives to arrest Akhilesh, which shocks the entire Goenka family. Samarth acts great in front of Akhilesh. He makes a sacrifice and takes the blame on himself. He gets himself arrested and shocks everyone. Akhilesh feels indebted to Samarth. Will Dadi reveal the past to the family? Keep reading.

Anurag and Prerna perform in the Diwali party. They come together once again. Prerna has also fallen in love with Anurag. Shivani helps her realize her feelings. Anurag stops Navin from holding Prerna’s hand. He comes in between them and takes Prerna with him. He tells Navin that he doesn’t deserve a girl like Prerna. Prerna stops Shivani from telling Anurag about the court notice. She doesn’t want Anurag to know anything about her helplessness. He wants Prerna to get away from Navin. Prerna refuses to Navin’s dance request. She asks him not to try compel her else she will hurt him again. Anurag spies on Navin to expose him.