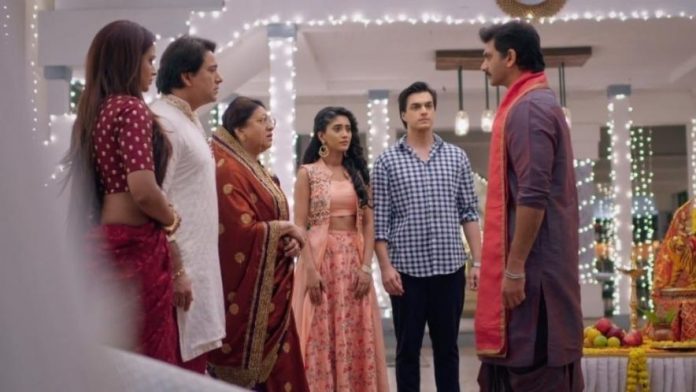 YRKKH brings a plethora of emotions over past

He asks them to get prepared for the eve of Diwali when he will strike the Goenkas and get them on road. He tells them that nothing will remain the same after Diwali. He wants to ruin them on Diwali and bring darkness in their world. He wants to see if their love is bigger than his hatred. Kartik and Naira also challenge him that they will end his hatred by their love. Akhilesh and Surekha want to have a private party for their sons’ birthday, but their sons try to unite the family. The children act responsible and please Suwarna. Samarth turns angry recalling how Dadi has ousted his family and snatched their rights. He feels nobody can fail his plan.

YRKKH brings a plethora of emotions over past

Meanwhile, Naksh gets a huge shock knowing about Naira’s sickness. He gets upset with Kirti for hiding the matter. Akhilesh and Surekha celebrate Lav and Kush’s birthday. The entire family blesses them. Kartik and Naira get the kids in their team to expose Samarth. Samarth makes sure that he hurts the Goenkas. Kartik tells Naira that Samarth isn’t leaving any clue behind. They stay alert to protect their family from Samarth.

Samarth begins his evil plan against Goenkas. Samarth tells Kartik and Naira that he will ruin everything they have set. He asks them not to beg him for mercy. He proves that he will never forgive his culprits. Kartik and Naira perform in the birthday party. Akhilesh and Samarth face troubles when police lands in the party to arrest them. Samarth takes the blames and gets arrested, while saving Akhilesh. He knows he has to play safe in order to fail Kartik and Naira.