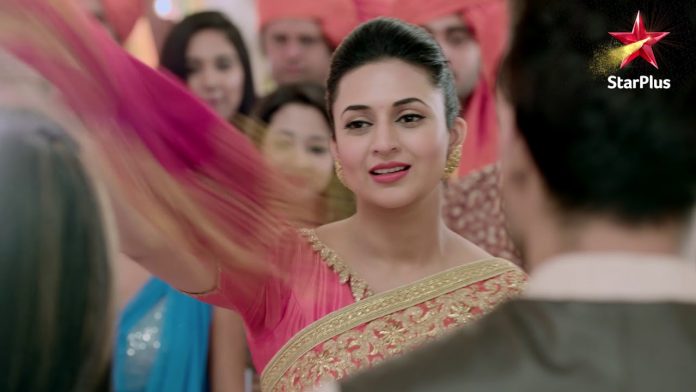 YHM: ‘Too Shocking to handle’ revelations next… Rohan and Karan pamper Aaliya and Ruhi with much love. They don’t want their wives to go for Pagphere. On going home, Aaliya and Ruhi participate in the post marriage rituals. Bhallas get happy with their coming. Raman and Ishita want their daughters to stay happy always. Aaliya and Ruhi can’t imagine that the happy marriage has more to it. They spend time with the family. Ishita feels happy that both her daughters are at peace. She can’t wish for something else. She tells Aaliya that she is relieved seeing their happy in-laws.

Raman and Ishita receive a huge shock on knowing about Sudha, who has kidnapped Karan and Rohan. He can’t believe this. He wonders why is Sudha so after them. Sudha tells Raman that she will not free his sons-in-law. Raman gets terrified. Ishita gets informed about Sudha’s kidnapping move.

Ishita can’t believe that Sudha can fall to this extent. Ishita learns Raman has gone alone to save Rohan and Karan. She feels even Raman’s life is in danger. Ishita tells Simmi that she will also go to save Raman. Simmi hopes they are fine. Sudha creates much drama to get some entertainment. She asks Raman to save his sons-in-law. She tells Raman that she has already warned Rohan and Karan, and they didn’t listen to her. She reveals that she will hurt him by hurting his daughters. Raman asks her to let Rohan and Karan go. Sudha tries to strike a deal with Raman again. She asks him to agree to her tasks if he wants to save them. Raman gets compelled by Sudha. She makes fun of Raman and makes him run like a puppet. Ishita too worries for Rohan and Karan. Sudha tortures Ishita in a different way. Sudha tries to ruin Raman and Ishita.

Raman and Ishita rush to free their sons-in-law from Sudha, only to realize a shocking truth. They learn that Karan and Rohan are actually Sudha’s sons. Sudha ousts Aaliya and Ruhi from her home to defame the Bhallas. She breaks down Raman and Ishita by making the revelation of a shocking plan. Sudha has conspired and fooled them by making Kaushalya pretend as Rohan and Karan’s mum.

Sudha throws out her Bahus. Ishita doesn’t want Aaliya and Ruhi’s lives to get ruined. She hatches a new plan to battle Sudha. Ishita gets her daughters along. She takes a baraat for taking her sons-in-law. Ishita tells Sudha that she has come to take her sons-in-law home so that they can never forget their care and service. Ishita wants to teach a lesson to Sudha and her sons.

Mariam confronts Fawad for his constant chase to ruin Majaaz’s reputation. She asks him why does he want to put the terrorist tag on Majaaz. He tells her that she won’t be knowing anything about the terrorists. He asks her to stay back from the matter. Fawad tells her that Majaaz is a dangerous terrorist and she should be better away from this matter. Mariam asks him about his keen interest and anger over Majaaz. She asks him to admit that Majaaz is related to him, and that’s why he is too hurt for his truth. Fawad admits that Majaaz is his uncle, but swears of not leaving him. He wants to expose Majaaz’s truth.