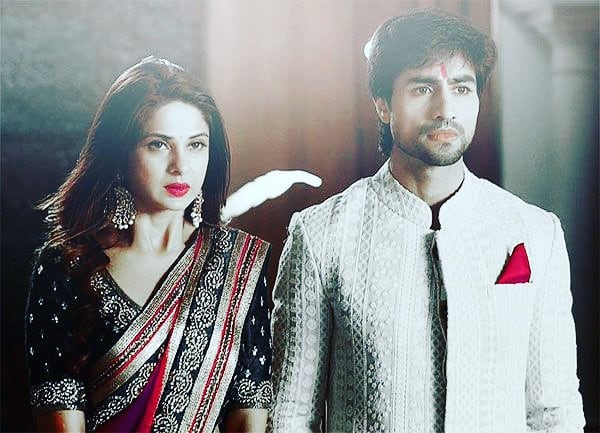 There is a big drama with Harsh’s shocking murder. Anjana breaks down with Harsh’s death. She gets mentally unstable with the shock. She can’t believe Harsh’s death. Bigger shock comes with Aditya’s name dragging in the case. The murder blame comes on Aditya. Aditya bears the punishment. Zoya knows that Aditya is innocent, and he can never kill his father. She believes Aditya and his situation. She knows Aditya’s family tensions. She tells the inspector that Aditya is innocent, and he is just framed in the case. Inspector denies to help her. He tells her that there is evidence and witness against Aditya. He reminds how Aditya has publicly threatened to kill Harshvardhan.

Zoya gets adamant to prove Aditya innocent. Inspector tells her that Aditya will get termed for his entire life. Zoya wants to save Aditya from life imprisonment, Rajveer is happy that he has got his revenge fulfilled at the cost of Harsh’s death. He still recollects Aditya’s words.

He wants to break Aditya and Zoya’s strong relationship at any cost. Arjun looks after Anjana. He wishes his family gets back together. Zoya acts strong for the sake of Aditya. Aditya feels guilty. He tells Zoya that he has ruined everything and turned his mum into a widow. He feels he has killed Harsh. Zoya tells him that he hasn’t done anything, and Rajveer is behind this. She asks him to try to recollect the happening. Aditya doesn’t remember anything. He doesn’t trust himself. Zoya trusts him. She tells him that he has to believe her belief. Aditya feels he deserves punishment. Aditya doesn’t know how will he face Anjana now. He regrets for fighting with Harsh in anger and saying so bad to him.

Zoya thinks otherwise. She wants to save her husband. She just wishes Aditya’s confidence gets restored so that they get together to fight with their enemy. She stays by Aditya’s side all the while. Rajveer strikes to break Aditya and Zoya’s relationship by keeping cheap demands in front of her. Rajveer tells Zoya that he wants her in his life. Zoya doesn’t understand what does he want in return of helping Aditya. Rajveer wishes to spend romantic time with Zoya, which shocks her.

Rajveer tells her that he knows Aditya’s innocence and also holds evidence to get him released. Zoya turns helpless and falls in Rajveer’s trap. She accepts his demands in order to save Aditya. Zoya wants to protect Aditya. This shocking news reaches Aditya. It breaks down Aditya. He gets misunderstanding. He breaks ties with Zoya. There will be a short leap in the show with Aditya and Zoya’s separation.