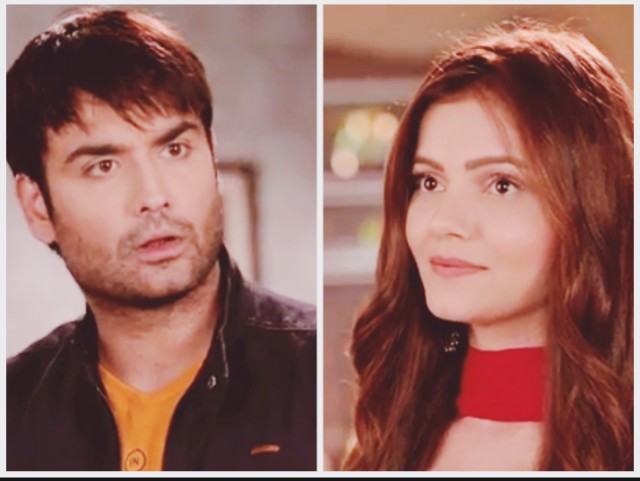 Shakti: Harman and Preeto leave from house to search Soumya. A road side seller asks him to buy a chain for his wife. Harman buys it with a thought of Soumya. He tells Preeto that he will make Soumya wear it and will throw whatever she is wearing. He says Soumya will think him mad, stupid, but loves only his Gulabo. Soumya says Kinnar can’t get married, but Sameer accepted her with her identity. They search Soumya and come to Sameer’s mum house. Sameer and Soumya start their new life at a new place. Harman meets Soumya and apologizes to her. He writes Sorry with the candles. He holds his ears and does sit ups. He tries to convince her. Soumya blows off the candles. Her hand burns in this process. She hurts herself in anger. Harman stops her from her madness. He asks her not to hurt herself. He gets ready to bear her annoyance.

Roop: Ranvir continues to scare Ishika in the jungle adventure. He thinks he will not let Roop and Ishika unite in the jungle like last time. Roop calls doctor as Ishika is unwell. Doctor scolds Roop and asks him to become friend of his wife and expect her to do wifey duties. Roop says Doctor’s info was half, but she was right that they need to become friends first. He says I know our marriage is a deal and compromise, but until we are together, we can stay as friends and why enemies. He extends his life for friendship.

Internet Wala Love: Aadhya worries for Jai and realizes her love for him. Jai gets treated in the hospital. Rupa asks Aadhya to stay away from Jai and warns her. Samrat is behind Jai’s accident and thinks Jai and all Mittal family will suffer. Aadhya comes home. She imagines Jai coming to her and asking her why she didn’t meet him. He says I thought I will see you when I open my eyes. Aadhya shouts Jai and thinks to reach him before he wakes up. She runs on the road and goes to Jai’s house, but thinking of Rupa’s threat, she climbs the stairs to go to his room.