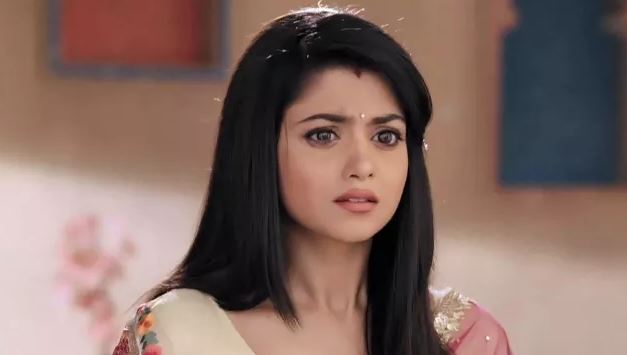 Jiji Maa: Haryali commands Niyati to leave the house, if she wants to add up problems for them. Niyati gets compelled. Haryali makes Niyati realize that she is a danger for the family. Niyati feels guilty that Vidhaan is sacrificing his happiness because of her. Haryali tells her that Vidhaan loves children, he isn’t saying anything just for her sake. She says if you love Vidhaan, then leave him so that he can remarry, if the heir doesn’t come, the house will be ruined, Vidhaan will be the first person to get destructed. Niyati worries for Vidhaan. Niyati goes away from the house.

Haryali tells Falguni that its right for Niyati to leave, Niyati worries for the family and left them, she is sensible. Falguni calls her stone-hearted. Haryali says you just worry for Niyati, but I worry for this entire family. Falguni gets raging and asks her the proof about her dream. Haryali says nobody has asked me about the proof. Falguni says its blind belief, you are ruining families by saying wrong. Jayant supports Haryali. He says we need a heir if Haryali is saying so. Suyash supports Falguni. He says we can’t punish Niyati for this, Falguni isn’t wrong. Haryali gets angry on Suyash and Falguni.