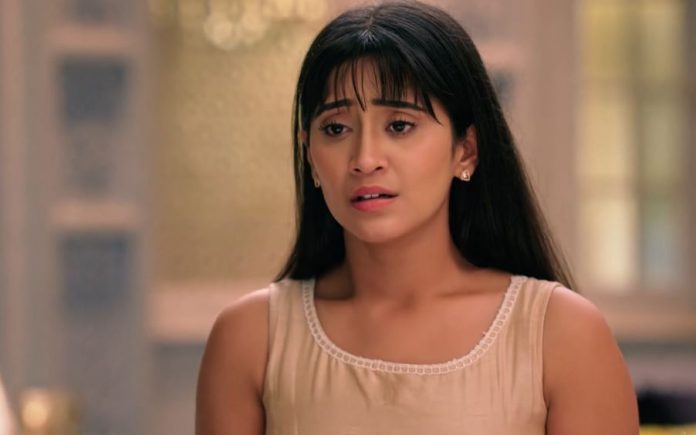 Telly Reviews Yeh Rishta Highlights 26th September 2019 Clueless Naira Shocker for Vedika Vedika awaits Kartik at home. She gets daydreaming which brings her fears alive. She gets to face Kartik, who calls off their marriage since he isn’t able to take it anymore. He doesn’t want to drag their relation on his shoulders. He tells her that he isn’t able to bear the burden for long, he wants his son back. He tells her that he wants Kairav back at any cost, and he may allow Naira to live in Goenka house as well if needed. He tells that if Vedika has any problem with Naira, then she may leave the house and end the relationship as she wants.

He tells that he will not bear any compulsion in his life, which separates him from his son. He leaves her free to decide about her life. He clears out that she doesn’t mean anything more than a friend for him, he won’t be able to give her wife’s rights, since he isn’t wishing for bonding with her in their marital relationship. He just wants to spend time with Kairav and doesn’t mind if Naira is around.

Vedika breaks down when he ends ties with her. She doesn’t want this scary dream to turn true. She wants to take an action before Kartik really comes with such a decision to her. On the other hand, Naira gets a nightmare too. She finds Vedika accusing her of taking advantage of Kairav to trap Kartik back. Vedika tells Naira that she has been using Kairav as a medium to keep Kartik close to her. She reprimands Naira to the extent that it gets intolerable for Naira. Naira doesn’t want this nightmare to turn true. She wants Kartik to go home before Vedika turns more upset. Naira knows Vedika won’t understand her. She angrily wakes up Kartik. Kartik doesn’t regret that he had upset Goenkas by coming to meet Kairav this way.

He loves his son a lot. He wants to live with Kairav. Naira tells him that Vedika is too worried for him. She reminds his duties towards his wife. He asks her not to remind him the duties. He is fine as a normal being. He doesn’t want to become a great person like Naira, who sacrificed relations. He tells her that he won’t sacrifice anything, he is happy to be kiddish and crazy as long as he is with Kairav. He rejects Naira’s advice. Naira asks him to just go home before his family arrives. Kartik reminds her wrong decisions.

Kartik wakes up and likes their cute fights. He tells that he had called Kartik home at night since he was badly missing him. Naira asks him not to repeat this again. Kartik and Kairav take each other’s side. They become a team. Vedika calls Singhanias to know about Kartik. She learns that Kartik is with Naira. She tolerates this. She overhears Dadi and Manish’s conversation. Manish doesn’t want to keep Kartik away from his son. Dadi too misses Kartik a lot. Manish tells her that Kartik isn’t completely wrong.

Manish wants Kairav back in their house. Vedika realizes that the family is madly loving Kairav by forgetting Naira’s mistakes. She gets upset. Later, Kartik tells Kairav that he will leave now and get busy in work. Kairav doesn’t want to leave without having breakfast. Kairav tells him that he should dine with them and then leave for work. Kartik gets happy hearing Kairav’s cute talks. He gets such happiness for which he was longing in his life. He finds Kairav just like him. Naira doesn’t want Kartik to stay back for long. She is tensed about Vedika. Kairav tells Kartik that they will brush teeth together today. He wants this moment to strike every day.

Naira tells Kartik that he should be at his home at this time. She wants him to handle his wife. Kartik is sure to handle his wife and family. He asks Naira not to bother herself. Vedika learns about Kartik and Naira enjoying their lives with Kairav. She turns raging. She speaks to her friend, Dr. Pallavi, who tells about the necessity of Kartik and Naira’s divorce. She tells Vedika that if their divorce didn’t happen, then Kaira marriage will be still valid. She tells Vedika that Kartik’s marriage with her will be void if he isn’t divorced with Naira. She tells that illegal marriage is condemned in the society.

She asks Vedika to find out about Kaira divorce and make sure that it happens. Vedika can’t believe this. She doesn’t want her marriage to be called illegal. She wants the law to support her. She gets terrified. She doesn’t want Kartik and Naira to unite. She runs to stop Naira from breaking her marriage. She takes Pallavi’s advice to break Kaira apart. Kartik dines with Singhanias after a long time. His old memories get revived. Vedika gets angered that Kartik isn’t valuing their relation.