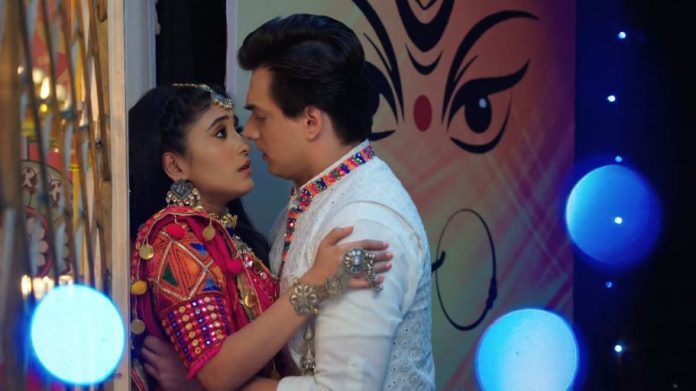 Hotstar Yeh Rishta Kaira Dandiya nights twist Kartik advises Naira to be on time at the court when she is summoned next time. She tells him about the series of events that happened. She tells she faced many problems. He doesn’t have any interest to know about it. He asks her to meet his lawyer Damini, who wants to know her perception also. Naira’s lawyer asks her not to give any statement that Damini uses against her. He tells her that Damini is very sharp and can do anything by acting sweet towards her. Naira is sure to handle Damini. Lawyers Sharma and Gupta advise Damini not to fight the divorce and custody case, since Kartik and Naira are totally crazy.

They give her the inputs about Kartik and Naira’s true love and first divorce. They tell Damini that Kartik and Naira are inseparable. Damini wants to meet Naira and know her well. Kartik expresses that he hates lies and liars. Vedika feels guilty that she also lied to him about compelling Naira for divorcing Kartik. Vedika wants to tell Kartik that she is behind the divorce decision of Naira. Kartik doesn’t want anyone to hide the truth. She is afraid that Kartik will hate her on learning the truth.

Kairav looks for his toy and gets inside Naira’s car to give her a surprise. Naira informs Naksh that she is heading to Damini’s office. Kairav gets to see Kartik and Naira secretly meeting. He thinks they are planning some surprise. He spies on them. They go to the family court to meet Damini. Naira sees Kairav there and changes her serious talks. She tells Kartik that she wanted to take some pictures there. Kartik doesn’t understand this at first. She shows him Kairav hiding behind the car. Kartik also plays along. Kairav gets happy when he hears them talking about surprising Kairav with the Dandiya event.

Damini finds their behavior crazy. Kartik and Naira take Kairav home and ask him not to hide like this again. Singhanias and Goenkas decide to celebrate Dandiya Garba for Kairav’s sake. Kartik doesn’t want Kairav to know that Vedika is his wife. Kartik meets his son and hugs him. He loves Kairav a lot. Kartik gets mesmerized seeing Naira in her stunning avatar. Vedika meets her friend Pallavi. She feels guilty to make Kartik troubled. She tells Pallavi that she has hurt Naira a lot. Pallavi tells her that Kartik and Naira are happy together, they are inseparable. Vedika gets scared seeing their happy family.

Pallavi asks her not to fool herself and accept the truth. Kartik and Naira enjoy the event with the reunion theme. Kairav wants them to dance together. Kartik and Naira dance together for Kairav’s sake. Vedika gets hurt thinking about them. Vedika learns about the electricity running in some pole. She wants to inform the family to secure their lives. She finds the gate locked. She fails to reach and alert them. Pallavi helps Vedika again and asks the matter. Vedika gets delayed. Kartik and Naira have a romantic moment when he tries to fix her dress lace. He gets protective about her. They come closer like before.