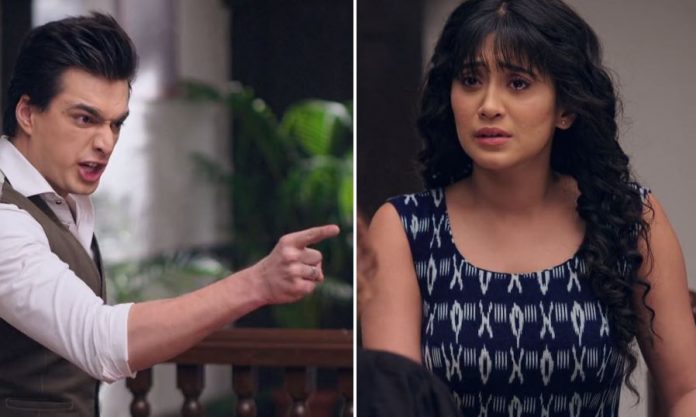 Yeh Rishta Unexpected Kartik leaves Naira shocked Kartik and Naira finish their meeting with Damini. He offers a lift, but she refuses to accept his help. He still doesn’t remember what had happened last night. He asks her if she remembers anything. She maintains distance from him because of her promise to Vedika. She tells him that they should better forget the past and think of their present, where they are fighting for Kairav’s custody. She tells him that they are against each other in the court.

He knows that they are doing this for Kairav. Vedika shatters thinking of Kaira marriage. Naira finds her and tries to pacify. Vedika confronts her for her lies and cheat. She asks Naira why did she lie about the kidnapping if she had to spend time with Kartik. Naira clarifies that the kidnapping was for real. Vedika asks her why did she not leave from Kartik’s life. She insults Naira for falling low and breaking the promise. Naira tells her that she has no reason to lie.

Vedika tells her that she knows about their remarriage. She doesn’t listen to Naira. She vents out her frustration on Naira. Naira breaks down when Vedika accuses her. Naira tries hard to explain Vedika. Vedika sheds tears. Kartik informs Naira that Kairav is waiting for her. Naira vents anger on Kartik. She holds him responsible for spoiling everyone’s lives. He doesn’t understand her rage at first. When he finds Vedika around, crying and breaking down, he understands Naira and Vedika’s clash.

Meanwhile, Damini can do anything to ensure her victory in the case. Damini reaches Goa to collect evidences against Naira. She gets a strong proof against Naira, that she was thinking to abort her baby. She gets the documents against Naira. She thinks to use the abortion consent form signed by Naira against her in the court to make Kartik get the custody. Naira feels hurt by Vedika’s accusations. She gets angry on herself for not meeting everyone’s expectations. She cries on the fate, playing games with her emotions. Naira eats spicy chaat to punish herself.

Vedika ruins her room on reaching home so that she can vent her anger. She informs Pallavi about Kaira marriage. She holds Naira responsible for ruining her life. She feels some disaster is close. She senses that her marriage is about to end. Kartik stops the workers and gets digging up the soil to vent his frustration. Suwarna stops Kartik from losing his senses. Kartik expresses his emotional pain. He tells Suwarna that everyone can see Naira and Vedika’s pain, the injustice happening with both of them, but none can understand the pain he is going through.

He doesn’t want to part ways with Naira, since she is his first and last love. He tells Suwarna that he loves Naira a lot, and can never love Vedika the same way. He feels helpless that he got trapped in the unwanted marriage and ruined Vedika’s life as well. He never wanted to hurt Vedika. He feels responsible for her tears. He is guilty that he can’t even console Vedika in such a situation when he can’t give her any hopes. Suwarna connects with his pain. He tells her that he is much hurt that he has ruined two lives. He wishes that he could fix these things.

Suwarna suggests him to drop his ego and withdraw the custody case so that they can deal with Naira in a calm manner. He regrets that Naira didn’t return in time. He wishes that she came back and stopped his marriage on time. He gets angry that Naira ruined everything by being stubborn. Naira gets hurt after eating spicy chaat. Naksh takes care of her. Suwarna meets her with a request. She asks Naira to drop the custody battle so that none gets hurt. She wants Kartik and Naira to share their rights on Kairav. She wants them to show maturity like parents. Kartik is ready to give a chance to Naira, if she can agree to his terms. Suwarna asks Naira to just think of Kairav, who would feel bad seeing his parents fighting.

Naira tells Suwarna that she is very much helpless. Kairav overhears them and wonders what do they mean. Naira recalls her promise to Vedika that she will leave from her life. She asks Suwarna to understand her and support her in getting Kairav’s solo custody. Suwarna gets dejected. Damini accuses Naira for thinking of aborting the child. She tells the court that Naira doesn’t deserve to become a mum, since she never wished so.

She asks Naira why does she want to keep Kairav when he was so unwanted in her life. Kartik fights Damini when he finds her insulting Naira. He can’t hear anything wrong about Naira. Damini feels insulted when her client goes against and shouts at her in the court. Kartik doesn’t care for the case verdict and defends his wife Naira. They get into an emotional moment. Kartik shows his love for Naira in the most unusual way.