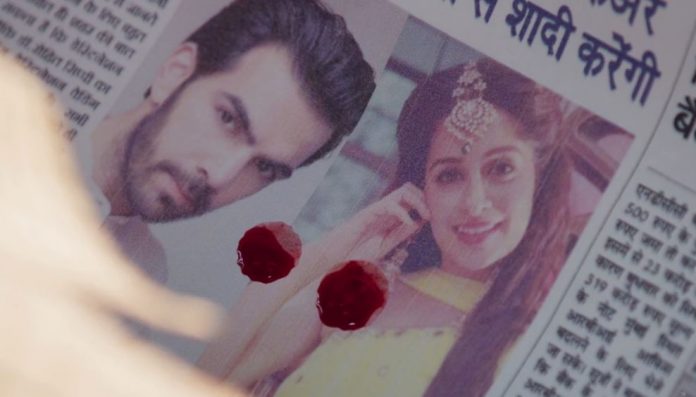 Kahaan Hum Huge Shocker Sonakshi faces Darr twist Yash gets concerned for Pooja, on hearing about her late night parties. He asks her to make female friends. She asks him why does he have a problem with her parties and male friends. She wants him not to be orthodox and stay the cool dad always. She tells him that friends aren’t judged by gender. Yash asks her to be careful, since these days people aren’t genuine. Yash wants her to be safe always. He asks her to be home soon. Meanwhile, Veena gets Sonakshi’s surprise for Rohit. She tells Rohit that Sonakshi loves him a lot, she is away but still making sure that her presence gets felt by Rohit. She reads Sonakshi’s letter and cheers up Rohit. She asks him why is he so upset when he received Sonakshi’s love tokens.

Rohit shares his problem with Veena and Yash. He tells them how Karan barged into his hospital to threaten him about defaming Sonakshi by fake news of pregnancy and abortion. He tells them that Karan is demanding a big amount of 10 crores to stay away from their lives. Veena can’t believe that Karan has fallen so low. She tells Rohit that Sonakshi is their family now. She can’t see Sonakshi’s defamation.

She asks Rohit to pay 10 crores to Karan and stop him from messing up their lives. Rohit tells her that he won’t give anything to Karan. He wants to teach a lesson to Karan. Yash supports him. They go to meet Karan. Rohit tells Yash that he got the fake notes to fool Karan. He hands over the bag to Karan. He makes Karan sign the legal documents. He tells Karan that its a declaration that he will never interfere in Sonakshi’s life and not try to malign her image in any way possible. Karan signs the papers for Rohit.

He gets tricked by Rohit and Yash. He learns that the money is fake. He turns shocked and angered to tackle down Rohit. He asks Rohit how could he trick him. He finds Rohit foolish to invite risk. He shoots at Rohit’s arm. Rohit gets timely help from Veena, who sends the police to save his life. Rohit asks Inspector to arrest Karan and punish him.

Meanwhile, Raima meets Sumit and shares a friendly bond with him. He praises her for being so kind and good hearted. He tells her that he is just falling for her, by getting to know her more. Raima gets over his flirting. She asks him to help her in uniting Rohit and Sonakshi. She gets a feeling that Sonakshi will take her sacrifice otherwise and call off the marriage with Rohit. She doesn’t want this to happen. She wishes Rohit and Sonakshi to settle down and stay happy. Sumit agrees to help Raima in her good motive.

Rohit gets rushed to his Sippy hospital, where he undergoes the treatment for his injured arm. Pulkit informs Suman and Raima about Rohit’s injury. Suman looks after Rohit. She tells him that he is her responsibility in Sonakshi’s absence. Rohit learns that Sonakshi’s flight is cancelled. He wants to personally go and get her, since he is missing her a lot.

Suman doesn’t want him to go when he is hurt. He gets an amazing surprise when he finds Sonakshi there. He hugs Sonakshi. She senses that he was in some big problem. Rohit tells her that he has got Karan arrested for his crime. Suman prepares the breakfast. She is excited for Sonakshi and Rohit’s marriage. Suman gets to read the news in the newspapers. She is very happy, while this news causes an argument between Naren and Veena. Naren doesn’t want to accept Sonakshi as his Bahu. He makes it clear that he is against the alliance. A new entry happens.

Sonakshi’s obsessed lover is seen, who gets the news of Sonakshi and Rohit’s marriage. He can’t tolerate this. He hurts himself in anger. He just wants Sonakshi in his life. He gets hell bent to stop Sonakshi’s marriage with Rohit. There will be high voltage drama with the negative entry in Sonakshi’s life.