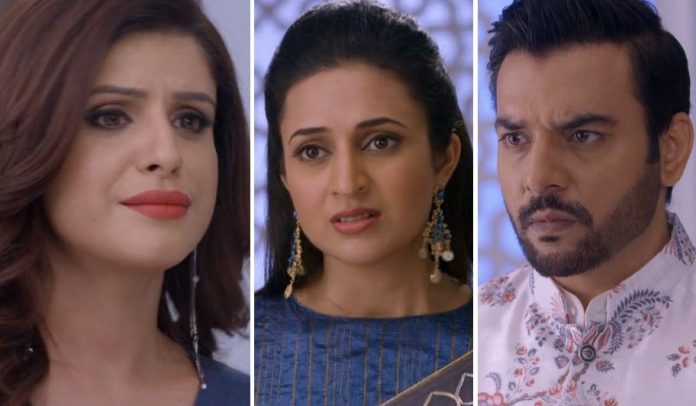 Yeh Hai Mohabbatein StarPlus Natasha wants revenge Arijit wants to get rid of Sunil so that he can take Neeti to nurse Thia’s house. Sunil wants Natasha to get released from the jail. Sunil thinks to meet Bhuvan and pressurize him to help him. He sits outside Arijit’s house. Arijit finds him outside and tells Bhuvan that they have to wait until Sunil leaves. Sunil waits for long time and then makes a leave. Arijit gets happy that Sunil finally left. He tells Bhuvan that they will drop Neeti to Thia’s house soon. He shifts Neeti. Bhallas prepare for the Kanjak puja. Ishita wins all the applaud. She gives credit to her wonderful family. Raman is happy to see his family celebrating after a long time. Raman wants Yug to conduct the puja and get blessings.

Bhallas perform the puja and find themselves at peace. Ishita goes to meet her dad. She finds Sunil in neighborhood. She turns upset by the sight. She wants him to leave from their building. Sunil refuses to leave. She tells him that Natasha has killed the doctor and he doesn’t deserve to be here. He tells her that he is a tenant and pays rent on time, he will not leave. He lies about his computer knowledge. He doesn’t want anyone to doubt on him for erasing the clinic’s database. The family wonders where did Ishita go. Ishita returns home.

She tells the family that she is just worried about Neeti. She wants to get Neeti’s welfare. Raman assures Ishita that he will get information about Neeti. He asks Ishita not to lie to them, since she isn’t good at it. He wants her to share all her feelings with them. Raman and Sunil have a bitter argument. Sunil throws tons of attitude. He shouts on Raman. Ishita suspects that Sunil is up to something again. Sunil finds out the same car in the locality. He wants to spy and find out the truth. He gets to see Arijit with his daughter. He realizes that Arijit has secured his daughter by fooling him. He thinks he should have kept some crucial information about Neeti, so that he could blackmail Arijit.

He thinks its not late yet. He clicks Arijit and Neeti’s pictures to blackmail him. Sunil hands over a courier to Arijit. He wants to blackmail Arijit by Neeti’s pictures. Arijit gets a huge shock on seeing the pictures. He wants to know who is the blackmailer. He learns about Sunil and threatens him. Sunil tells him that he will inform Bhallas about him. Arijit gets happy to get Natasha released from the jail. Natasha returns to trouble Bhallas again. Arijit doesn’t want to spare Sunil.