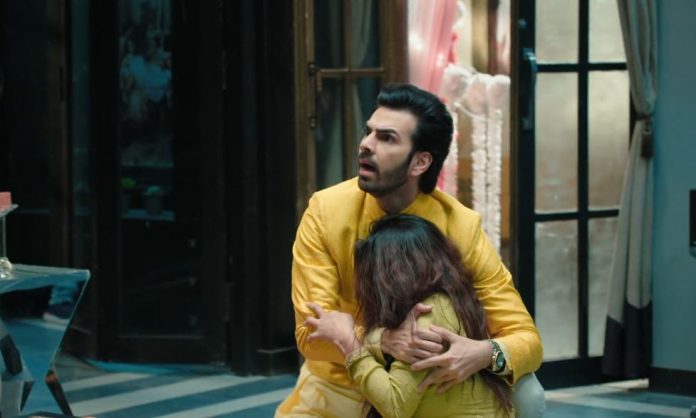 Kahaan Hum Molestation twist strikes Sonakshi Sonakshi finds Naren very angry. She apologizes to him for coming late in the function. He doesn’t forgive her. He asks her not to add up drama and delay the function further. He appears rude towards her, which angers Rohit. Veena apologizes to Sonakshi on Naren’s behalf. Sonakshi stops Rohit from arguing with Naren. Naren gets irritated and wants the function to end soon. Tanya looks for Rohan. She finds him missing since long. Deepa overhears that Pari is also missing from the party. She suspects that Rohan and Pari are together. Mahesh hides from Tanya and reaches Rohit’s room. Tanya finds Rohan with Pari.

Pari comes up with a convincing lie and gets saved from Tanya. Rohan thinks Tanya will never doubt on him. He is willing to play the game ahead. Deepa gets upset knowing he was with Pari. Tanya doesn’t suspect Rohan and Pari. Deepa wants to save Tanya’s marriage. On the other hand, Veena asks Rohit to take Sonakshi to his room so that she can get ready for the function. Rohit tells Sonakshi that her performance was really good, she danced like real Madhuri.

Sonakshi tells him that she had to fulfill his wish. She doesn’t let him thank her for the efforts. She asks Rohit to let her get ready in time. Rohit and Sonakshi spend time. When he goes, she begins to get ready. Mahesh gets mad about Sonakshi. He meets her. She assumes he is Rohit and asks him to take the penalty kiss if he is so insisting. Mahesh’s touch gets sensed by her. She gets a huge shock seeing the same disguised man. She screams while trying to save herself from Mahesh’s harassment. Mahesh doesn’t let her run.

He wants to kidnap Sonakshi. Rohit enjoys the party with his family. He dances happily, unaware of the problem Sonakshi is facing. Veena asks Naren to accept Sonakshi at least for Rohit’s sake. Vimmi goes to call Sonakshi. Sonakshi’s struggles and screams reach Vimmi. Vimmi finds Sonakshi in trouble. She beats up Mahesh in anger. She protects Sonakshi. Rohit learns about Sonakshi fallen in danger. He runs to save her. He gets to see Mahesh, who flees in no time. Rohit consoles Sonakshi and asks her not to let anything hinder their engagement. He doesn’t want Sonakshi to have bad memories in mind. He ends her fears.

After Sonakshi resolves the matter, she heads for the engagement. Rohit makes her feel special by his romantic gestures. He adorns the ring in her finger with love. He shows the cute gift for Sonakshi. He gifts her a bracelet and tells her that the ring signifies their relation, while the bracelet signifies their friendship. Sonakshi can’t get much happiness. She faces another trouble when the engagement ring goes missing. Mahesh manages to get saved from Rohit. He thinks the engagement can’t happen without the ring. Naren gets angry when Sonakshi loses the ring. He finds Rastogis much careless. He doesn’t like the tv show drama in his life. Sonakshi tries to manage the problem.