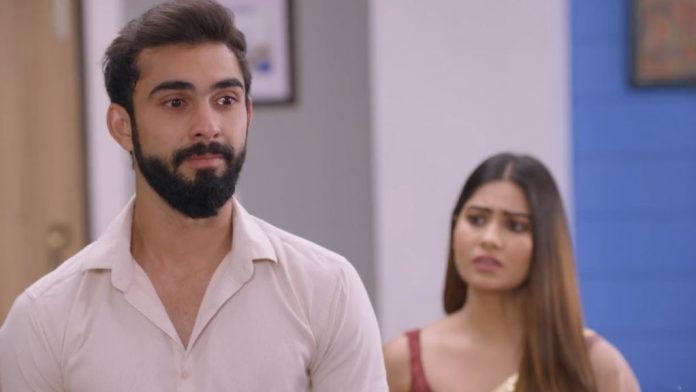 Yeh Hain Mohabbatein Huge Karwachauth twists Yug doesn’t return home. His careless attitude angers Raman. Raman reveals Yug’s big blunder to his dad. He tells how Yug has made a mistake and won the tender. He tells that the company wants them to fulfill the contract. He is helpless to abide, so that he doesn’t face the penalty. Raman doesn’t want any bad image for his company. He just wants Yug to assist him in finding a solution than running away out of cowardliness. Mr. Bhalla reminds Raman that even Raman used to make mistakes in the business decisions when he started his company.

He tells that the matter got so serious once, they had to keep their house mortgaged to pay the investors. He also tells that Raman was much in guilt, but didn’t lose hope, he had worked hard until he made them proud. He asks Raman to expect the same from Yug. He wants Raman not to be harsh on Yug and support him. Raman realizes that everyone makes mistakes. Ishita tells Raman that they shouldn’t make Yug realize that he isn’t a Bhalla family member. Ruhi too wants Raman to give a chance to Yug. Raman gets convinced by the family.

Yug misses the family. He feels no one needs him. Aaliya and Mani console him. Karan tries to convince him and take him home. He lies that Ishita has sent breakfast for Yug. Yug understands that Ishita is upset with him and didn’t send the breakfast. He gets angry on Karan for his lie. Aaliya is angry that none from the family called them home. The family just wants to give time to Yug. Yug gets an urgent call from the office. Yug and Raman learn about Malhotra’s move. Malhotra demands Yug to resign from CEO position, else he will withdraw his investment.

He threatens to make all the investors back out. Yug signs the papers in anger, without asking Raman. He gets misled that Raman also wants his resignation. Ruhi asks him to understand his mistake. Yug gets angered that everyone lost faith in him. Arijit is happy that his plan is working well. Ruhi fails to explain Yug about his wrong attitude. Karan assures that he will talk to Yug. Ishita asks Raman why didn’t he take any initiative for Yug. Raman tells her that Yug signed the papers in no time. He wants to handle Yug.

He asks Ishita not to pamper Yug and spoil his mind further. He wants Yug to become responsible. Yug informs Aaliya that he has resigned, but Raman didn’t stop him, since he isn’t Adi. Aaliya feels sorry. He asks her not to confront anyone. Natasha is troubled by Tara. Sunil tries to balance their equations. Natasha wants to get Shardul some way. She plans a drama on Karwachauth to get Raman kidnapped by Arijit. Natasha throws a challenge for Ishita that she will be celebrating Karwachauth with Shardul. Ishita doesn’t want Natasha to win. She tries to protect Raman. Arijit and Natasha join hands to bring twists in Raman and Ishita’s Karwachauth.