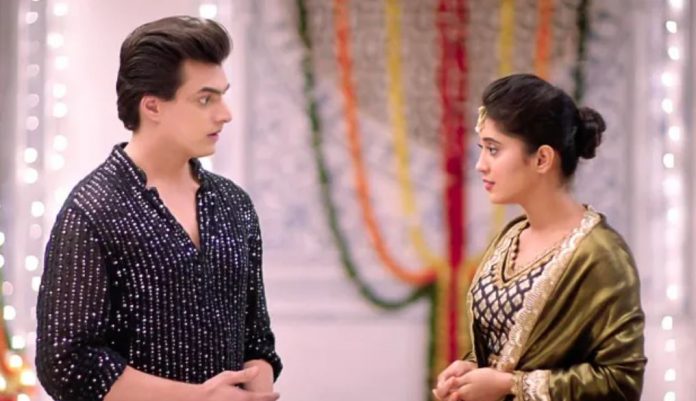 YRKKH StarPlus Spoilers Top Upcomings Lined Vansh and Kairav take Ram and Laxman’s avatar. They perform the Raavan Dahan. The family compliments Vansh and Kairav. Vansh lights fire to Raavan idol by shooting the fire arrow. The family performs puja. Kairav doesn’t know the consequences of his mistake. He stands behind the idol, unaware that it is catching fire. Kartik and Naira see him in danger. Naira takes Kairav away when the idol falls down. Kartik bursts his anger on Kairav. He asks him how can he do this mischief, if he is Laxman, he has to be Ram/Vansh. Kairav hugs Naira. Kartik asks Kairav not to hide in his mum’s lap and answer him the reason for such a wrong move.

He asks Naira to explain Kairav that he won’t do such a thing again. He tells that his mistake would have cost his life. Kairav gets scared of him. He runs away. Naira and Dadi calm down Kartik, knowing Kairav is sensitive. Kartik meets Kairav to apologize to him. Naira and Kartik try to cheer him up and share their plans for his birthday. Kairav gets happy seeing them together, doing the arrangements of the birthday party. Kairav spends time with them and gets happy. Naira doesn’t want Kartik to have anything in his heart. Kairav doesn’t get clear of Kartik’s intentions.

Muskaan:
The family gets worried finding Lovely unconscious. Ronak calls a doctor for her check up. Doctor checks Lovely and tells them about someone adding sleeping pills in her food. Surendar tells him that Muskaan would have done this. Bua also feels the same. Ronak trusts Muskaan completely. Bua, Bunty and Dolly refuse to give any vow. Hanumant is always with Ronak. Ronak doesn’t want to compel Gayatri. He decides to leave the house with Muskaan. He recalls the old times. Lovely stops him from leaving the house. She comes up with an emotional drama. She convinces Ronak to stay back.

She apologizes to Muskaan. She wants a chance to treat her well. Ronak gets happy. Ronak and Muskaan get married in the family’s presence. Muskaan turns overjoyed. Ronak wants his family to make vows. The family makes vows towards Muskaan. Muskaan can’t ask for anything else. She promises to support Lovely. Lovely has evil intentions on her mind. Ronak promises Muskaan to keep her with love and respect. Sir ji sees his burnt face and turns angry. He wants revenge on Ronak and Muskaan.

Sufiyana Pyaar Mera: Nilam rescues Krish from Rupali’s trap. She gets Krish home. Nilam tells them that Rupali is doing black magic to harm Madhav’s family. Saltanat can’t believe this. Madhav knows Rupali’s truth. Nilam tells them that Rupali had caged her. Saltanat wants to know why is Nilam doing this. Madhav thanks Nilam for saving Krish. He wants to protect Krish. Zaroon asks Madhav about his past with Rupali. Madhav wants to file a police complaint to get rid of Rupali. Shah family faces new trouble because of Rupali. Nilam and Saltanat take care of little Krish. Saltanat and Zaroon support Madhav to deal with dangerous Rupali.