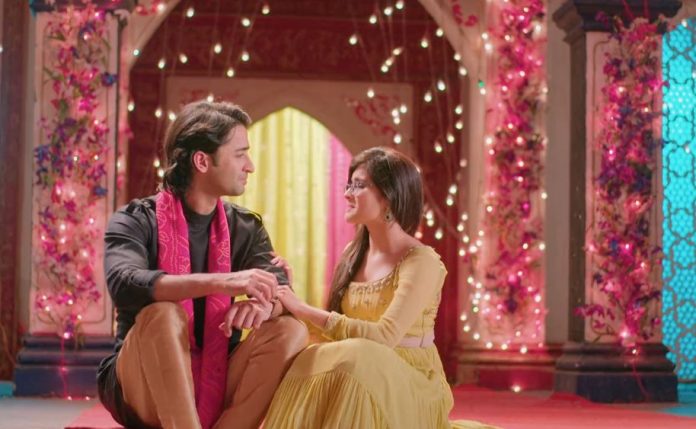 Rishtey Pyaar Shocking Breakup Abir Mishti separation Mishti spies on Mehul, while Kuhu is busy in her Karwachauth. Mishti searches for Mehul’s past in his house. She gets a big shock when she finds Mehul following her. She wants Abir and his family to get saved from every sorrow. She hopes that Mehul’s truth is nothing shocking. Pandit tells her that Mehul is really evil. Mishti wants proof against Mehul. Meanwhile, Meenakshi and Abir’s terms stay bad. She feels Abir won’t be living with his best friend, Nanu. Abir doesn’t want Meenakshi to blame him for anything. Abir doesn’t believe Meenakshi. He feels she hasn’t done anything to earn his trust. He promises to keep all the responsibilities towards his family. She is much hurt because of his arrogance.

Moreover, Kuhu is keeping the fast unwillingly, knowing Kunal doesn’t love her. Kuhu tricks the family and pretends to be happy with Kunal. She doesn’t want her family to know the truth of her relation. She hides about the divorce plea. Mishti doesn’t get any answers. She thinks to start from scratch again. She is sure to find some clue. Mishti lies to Abir about her trip. Mishti too keeps a fast for Abir. Kunal clears it to Kuhu that he won’t be coming to play a drama in Maheshwari family.

Abir advises Kuhu a plan. Kuhu knows Kunal loves his image a lot. She tricks him into believing that she will be exposing his truth if he doesn’t come to break her fast. Kunal decides to put up a happy drama. Mishti learns about Mehul’s suspicious activity. She tries to know about him. She gathers information. Mehul gets informed that a lady is trying to know his past. He suspects that person to be Meenakshi. Mishti gets chased by Mehul. She hides in the temple. She faints there. Abir tracks Mishti and reaches Rajgarh. He finds her unconscious.

He gets her to senses and scolds her knowing she has kept a fast for him. He breaks her fast. Pandit tells him that Mishti has come to know Mehul’s past. Abir gets much upset that she lied to him and was spying on his dad. He doesn’t forgive her for this. He tells her that she doesn’t trust him, which means they have no love between them. He gets badly hurt by Mishti’s wrong move. He shows his immense faith on Mehul. He doesn’t hear Mishti’s explanation. Mishti wants to tell him about Mehul’s fraud. Abir doesn’t think Mehul could be wrong. He gets in a big dilemma when Mishti turns against Mehul. Abir breaks up with Mishti. Mishti doesn’t give up and determines to expose Mehul.

Muskaan: Lovely is murdered by Sir ji. He makes the family assume that Lovely has committed suicide. The family cries for Lovely. Surendar blames Muskaan for Lovely’s death. Ronak asks Surendar not to create a scene at this time. Surendar tells him that Muskaan is responsible for this. He shows the suicide note to them. He gets the police there. He gets Muskaan arrested. Ronak and Muskaan are shattered. Muskaan asks Ronak to forget her and leave from her life. He doesn’t want to leave her alone in such tough time. She feels guilty that Lovely died because of her. Surendar threatens to get her punished. Ronak fails to get Muskaan bailed out.

Surendar hires a big lawyer Tejpal to get Muskaan jailed for ten years. Ronak meets Tejpal. He explains that Muskaan is innocent. Ronak finds something is wrong. He wants to find the truth. Gayatri asks Ronak for Muskaan. She doesn’t want to lose Muskaan. Ronak asks Gayatri to give statement in Muskaan’s favor to help her. The family agrees to him. Muskaan faces the court trials. Gayatri and Ronak support Muskaan, while the rest of the family give the statement against her. Muskaan gets accused for Lovely’s suicide move. She gets jailed and accepts the punishment, being guilt driven. How will Ronak save his Muskaan? Keep reading.