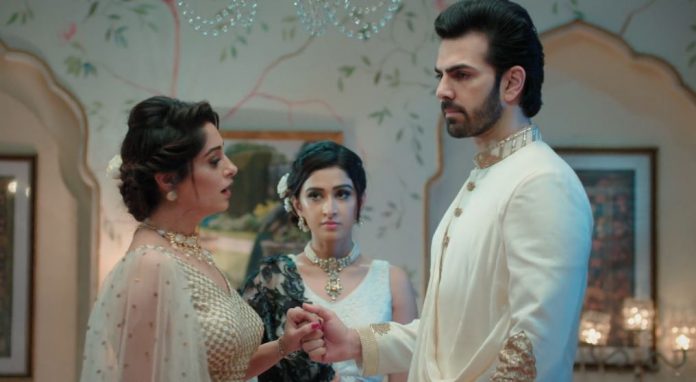 Kahaan Hum Starplus Raima turns vampish Track change Mahesh misleads Sonakshi to make her against Rohit. He upsets her mood by revealing Rohit’s lie. Sonakshi wants Rohit to be true to her, since trust is the basis of their relationship. She stays upset and wants to know why Rohit lied to her. Netra compliments Raima and asks her to try her hand at acting, since she has good looks and talents. Raima realizes that she has also achieve stardom like Sonakshi. She thinks about Netra’s suggestion. Rastogis perform in the Sangeet. Sonakshi doesn’t get happy watching it, because of Rohit’s lie.

Rohit asks her what’s bothering her. She confronts him about the lie. He accepts that Ravi is innocent. He had lied to her to protect her. She tells him that she would feel guilty if anyone from their families get hurt by the attacker. They both blame each other and end up fighting just before their performance. Sonakshi doesn’t want to dance with him. Rohit tells her that he doesn’t care, he will perform with Raima. Raima asks them to end their fight since they love each other much.

Meanwhile, Suman faces a big trouble when she learns that the media has boycott Sonakshi because of the tussle with Naren. She gets angry that Naren started ruining Sonakshi’s career already. She wants the press back to have the sponsorship. She tells Akhil that she will make Naren apologize to the media. She can’t let Sonakshi suffer because of Naren. Sulochana learns about Rohit and Sonakshi’s fight. She advises Raima to be with Rohit. She brainwashes her against Sonakshi again. Sonakshi doesn’t listen to Raima. She tells Raima about Rohit’s lie. She explains her feelings.

She wants Rohit to accept his mistake. Raima wants Rohit to stay happy and not spoil his Sangeet. Suman gives her word that Naren will apologize. She seeks help from Sukhmani. She tells Sukhmani that Naren’s bad behavior with the media is troubling Sonakshi’s image. She wants Naren to clear the mess. Sukhmani assures Suman that she will talk to Naren. She also relieves Suman about the expenses for the functions. Suman is stressed to lose the sponsors. She wants Naren to understand Sonakshi’s stardom, since Sonakshi is going to become part of Sippy family. She feels Sonakshi deserves their support.

Consequently, Sukhmani and Veena try to talk to Naren and convince him to apologize to the media. Naren outright refuses. Sukhmani asks him to apologize for Sonakshi’s sake. She asks him to keep his ego aside and think of his son’s happiness with Sonakshi. She wants Naren to make an apology even if he isn’t willing to. Naren doesn’t understand. He is angry recalling Suman’s humiliating words. Yash learns about Rohit’s spoiled mood. He asks Rohit to speak to Sonakshi and get her for performance. Rohit doesn’t listen to him. He goes to rehearse with Raima.

Yash asks Sonakshi to dance with Rohit. He explains how Rohit has put efforts to match her steps. He asks her to end her anger and not ruin the Sangeet. Sonakshi gets some sense and rushes to Rohit. She steps between Rohit and Raima. Raima feels alienated when Sonakshi returns to him. Sonakshi asks Rohit not to weaken their relation. They apologize and get back together. The family turns happy and awaits their performance. Raima finds them hugging and gets away. Sulochana doesn’t leave a chance to fill poison in her mind. Raima gets jealous of Sonakshi.

She feels Rohit doesn’t value her even as a good friend. Raima gets into a mixed dilemma. She gets troubled. Naren turns down Suman’s request. Sonakshi and Rohit learn about the media’s boycotting. They meet the reporters to apologize to them. The media demands Naren to apologize for his misbehavior. Sonakshi keeps a Bahu’s duty and defends Naren in front of them. Naren gets surprised and happy on seeing Sonakshi handling the media well. Sonakshi tells the reporters that they are like her friends and she won’t be marrying without their precious presence.

She asks them to cover all the marriage functions until the Bidaai. She tells them that media persons are like her family, their reaction is also justified. She balances between Sippys and media. She makes Rohit proud by being so down to earth. Sonakshi and Rohit perform in their Sangeet by calling off the unwanted drama. Mahesh’s plan to separate them fails badly. They prove that their love will overcome all the barriers. Raima will pose new problems for Rohit and Sonakshi’s relationship.