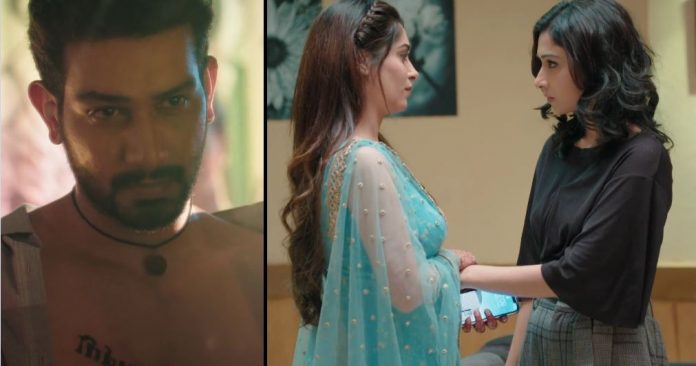 Kahan Hum Starplus Raima Mahesh unexpected swapping Sonakshi enjoys her pre-marriage functions with her in-laws. Suman tricks Veena to get the contact details of her CA, so that she can get an estimate about Rohit’s property. She lies that Sonakshi’s CA isn’t working for them now. Sukhmani asks her to keep financial matters separately. Suman tells her that Sonakshi is going to become her bahu now, and it would be better if the same CA handles Rohit and Sonakshi’s accounts. Veena gets convinced by Suman. She passes the contact details of her CA. Suman rushes to make a call. Sukhmani finds Suman’s intentions weird. She gets disappointed.

She tells Veena that she is fearing something wrong is going to happen. Suman tries to bribe Sippys’ CA to know about Rohit’s assets. She wants to meet him and get the details. She thinks once she knows about Rohit’s assets, she can secure Sonakshi’s future by asking for his share. She thinks she isn’t wrong, being Sonakshi’s mother. Rohit wants to get rid of the unwanted Mehendi on his hands. His family supports him in clearing it. Sonakshi had played the trick on him by Pooja’s help. She calls up Rohit to pull his leg. She invites him for the function. He makes an excuse about his work.

When she insists, he understands that Sonakshi has done this. He tells his family that he will not remove the Mehendi and let the colour get darker, since the Mehendi signifies the colour of love. On the other hand, Mahesh gets Sonakshi’s name tattooed on his chest. He is happy planning his marriage with Sonakshi. He wants to take Rohit’s place in the Mandap. Rohit tells his family that he will try to hide the Mehendi some way. He gets an idea and wear gloves. Meanwhile, Raima is disturbed because of Sonakshi’s behavior. She feels she was foolish to give away Rohit and his love to Sonakshi. She tells Sumit that she has made a mistake.

Sonakshi gets the protection thread tied up by Suman. Suman sends a similar thread for Rohit as well. Veena doesn’t realize what is Suman planning. Suman asks Sonakshi not to go out anywhere. Sonakshi still goes out and meets Raima to apologize to her. She happily shows her mehendi to Raima. Raima gets angered that Sonakshi has snatched her Mehendi, happiness and love. She feels she can snatch everything back from Sonakshi if she wants. She shows her negative side. Sumit senses Raima’s intentions. He tries to warn Sonakshi about Raima, but Sonakshi doesn’t listen to him. Sonakshi is happy that Raima is convinced and now she will be there in every function.

Raima feels she would have been the bride and every function would have belonged to her. She misses Rohit in her life. Rohit hides the Mehendi from Veena, who gets to see it. She asks him not to feel embarrassed and prove his love for Sonakshi by showing off the Mehendi to them. She tells that Sonakshi and he are equal in love, its good if the colour of love is expressed. Naren breaks the truth to his family that Suman met their CA to know about Rohit’s stake in Sippy properties.