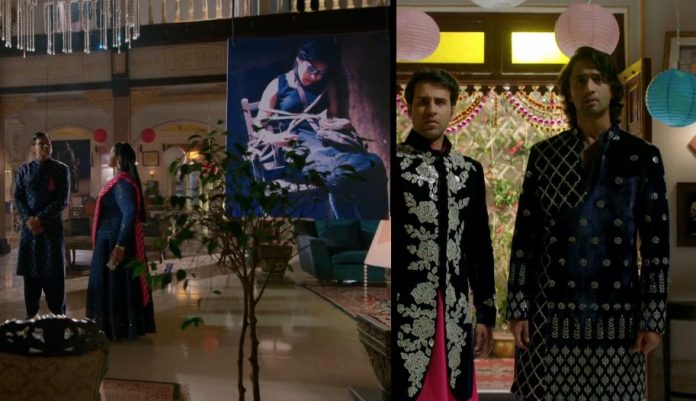 Rishte Pyar Hotstar Abir Kunal Union Mehul exposed Mehul suspects Mishti’s plans. He wants to make a leave. Mishti asks Kuhu to help her and stop Mehul. Kuhu realizes Mishti’s doubt on him. Mishti and Kuhu dance and involve the family members as well. Their wonderful dance pleases everyone. Nanu misses Meenakshi. Abir answers Nanu and Kunal. He tells them that Meenakshi left in anger. Mehul asks Abir to let him go and get Meenakshi back. Abir doesn’t want her back against her will. Mishti stops Mehul from going and asks him to let the engagement happen. She blackmails him.

Mehul supports her. Meenakshi apologizes to Rajshri and wants the engagement to happen for Abir’s happiness. She wants her son to achieve his happiness. Meenakshi’s absence makes everyone regrets. Rajshri and Mishti want the engagement to take place without Meenakshi. Kunal gets upset for a while. Kaushal and Laxman help Meenakshi. Meenakshi feels glad that he is capable to carry out the important work. She turns emotional. Kaushal tells her that he will get Mehul punished at any cost. Laxman gets evidences against Mehul.

She instructs Laxman and the lawyer to cancel Mehul’s application for Abir’s name change. Parul wants to get Meenakshi back. Abir asks her to bless him and not go anywhere. He happily hugs his dad. Mishti gets upset. She worries that Abir won’t be able to accept his dad’s ugly truth. Meenakshi works out her plan. She awaits Mehul. Kaushal doesn’t think Mehul will get trapped. She knows Mehul’s evil nature well. She knows that Mehul will feel threatened and try to run away with the property. She tells that Abir won’t leave Mehul if the truth comes out. She wants to expose Mehul’s truth and teach him a lesson.

She swears to ruin him. Meanwhile, Mishti expresses her emotions in front of the families. She feels proud of meeting Abir and falling in love with him. She praises Abir. Mishti and Abir get engaged. Mehul feels tensed and runs away. Mishti informs Meenakshi about Mehul’s escape. Meenakshi sends her aides on knowing that Mehul has arrived home. Mehul wants to take the property papers and run away. He doesn’t want to face Abir or Kunal. He tells her that he doesn’t care for anyone, be it Abir, Kunal or Parul. He asks her to give the property papers if she wants to save Abir. Meenakshi clears his misconception.

She doesn’t want Mehul to target Kunal. She tells him that his sons will hate him on knowing the truth. He tells her that she can keep her sons with her, but he wants the property. Abir feels Mishti is hiding something. Mishti wants to tell him Mehul’s truth. She feels sympathy for Parul, knowing how Parul got cheated by her cheated. She can’t imagine Parul and Meenakshi’s pain. She hides the truth from Parul.

Meenakshi asks Mehul if he is in hurry to run away because of his fear that his crime of kidnapping Mishti will come out. She presents the pictures of Mehul threatening captive Mishti. Mehul gets a huge shock realizing that Mishti and Meenakshi joined hands. Mehul begins to threaten Meenakshi to get away with the property. Kunal and Abir reach them and learn Mehul’s ugly truth. Mehul’s true colours gets exposed.