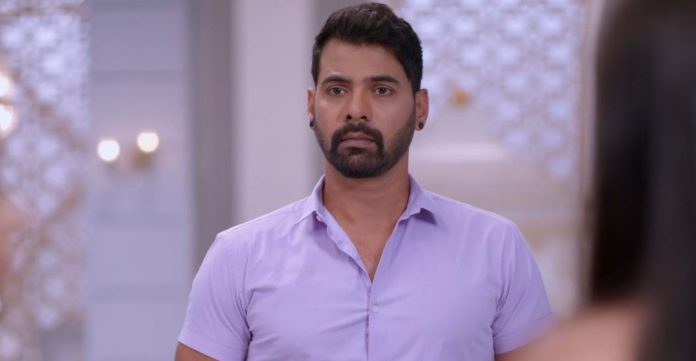 Kumkum Bhagya Zee5 Tonight Abhi Pragya stunning belief Priyanka lies in the court about her friendship with Rishi. She tells that Rishi was in love with her. She tells about their status difference. Pragya tells the judge that Priyanka wanted to marry Rishi, she is ready to take the case back if Rishi agrees to her proposal. Priyanka tells the judge that Rishi tried to molest her, and got scared when Abhi came to the office. Pragya calls the office employee Harish to bring the truth out. Priyanka worries that her truth will come out. On the other hand, Sanju meets Rhea and tells her that Ranbir had threatened him a lot. He tells that Ranbir wants him to go back to his town.

She asks him not to anger Ranbir and go away. He reminds her promise to settle him with Prachi. She feels all her plans flopped. She tells him that she needs time to execute other plan. She doesn’t want her plan to fail again. She is sure to get Prachi married to him. He believes her, being left with no option. Harish tells the lawyer that he knows Priyanka and Rishi well. Lawyer asks Harish to tell him who had called Rishi to the cabin. Harish admits that Priyanka had told him about Abhi calling Rishit to his cabin at odd hours.

Lawyer proves Priyanka’s intention. He tells the judge that Priyanka wanted to trap Rishi, and defamed him badly to compel him for marriage. Priyanka denies to make the initiative. Abhi gets confused about Priyanka. He believes Pragya’s words. Priyanka pleads them to get justice. Abhi consoles her.

Abhi doesn’t think Priyanka is mad. Pragya asks him to let the court decide. The court learns that Priyanka’s accusations on Rishi are baseless. The judge keeps the verdict secured until the next hearing. Abhi gets upset that Priyanka is suffering. Pragya and Abhi get away once again. Meanwhile, Ranbir meets Prachi at the college. They spend some friendly time. Ranbir is tensed about Rhea’s demands. He doesn’t want to break Prachi’s heart.

Pragya tries to explain to Abhi. Abhi feels Pragya deserves the praise for weakening Priyanka’s case. Abhi admits his mistake to bash up Rishi in the lock up. He feels Pragya used his mistake against him. He apologizes for it. A new misunderstanding develops between them. Rishi tells Pragya that Abhi is angry because of his defeat. Priyanka is much worried imagining the consequences. She confesses her dangerous love for Rishi.

She doesn’t think she should be scared of anything. Later, Abhi gets stressed that he is sending Rhea to Europe. He asks her not to go far from him. He feels he can’t live without her. Rhea convinces him that she will look after herself well. She asks Abhi to let her explore Europe. Priyanka acts upset with Abhi. She also decides to go to her home. Abhi gets disheartened that Priyanka is leaving his house. Priyanka manipulates him to put him into guilt.