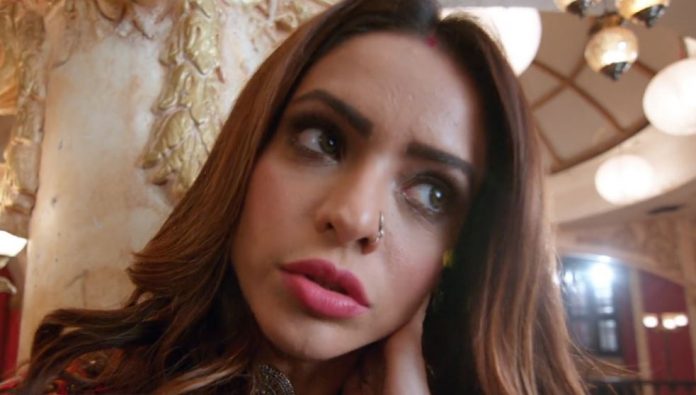 Kasautti Zindagi Kay Starplus Danger twist for AnuPre baby Anurag and Prerna’s closeness disturbs Komolika. Anurag gets busy in work. Komolika tries hard to get his attention. She asks him not to work at the time when she is with him. She tells him that she is his wife and needs his love. She feels its time that they take their relation ahead. Anurag gets helpless to listen to her. She gets close to him with dreams of romance. Anurag gets a chance to distance her when he finds some sparks in the wires. She tells him that its a little thing. He tells that its a serious threat, they have to stop the sparks. He goes out of the room to call the servant.

She is left alone. She gets angered thinking of his rude behavior. Komolika wants to vent her anger on Prerna. Prerna asks Veena to get sweets for her. Prerna is alone at home, when Komolika comes there to meet her. She blames Prerna for ruining her first night by igniting fire. Prerna doesn’t understand why she is blaming her. Komolika threatens her in the same way like before. Prerna is shocked to hear the same things as Komolika told her. She observes her and finds her resembling to Komolika. She gets worried by the thought.

Komolika reprimands her in an insulting way. She makes a leave. Prerna wants to find out the truth. Prerna thinks of Komolika further. Anurag messages her to get the file to his house. Prerna goes to meet him. Anurag asks Moloy to call an electrician for his room electricity line fixed. He tells her about Mohini’s plans for him. Moloy gets angry thinking Mohini is pushing Anurag close to Sonalika. He knows Anurag just loves Prerna. He just wants Anurag to follow his heart. He wants to talk to Mohini and stop her from playing with Anurag’s heart.

He goes to scold her. Prerna meets Anurag again. Mohini asks Prerna to apologize to Sonalika for spoiling her night. Prerna doesn’t apologize. Komolika asks Prerna what is she thinking. Prerna feels she knows her since before. Komolika gets worried that her identity will be known. She goes to Mohini. She thinks if Prerna is doubting on her truth. Prerna thinks of Sonalika’s reaction. Prerna wants to know what is Sonalika hiding. Her doubt gets more certain. She goes to check Sonalika’s wardrobe. She wants to find clues. Anurag asks Prerna why is she checking Sonalika’s belongings. Prerna makes an excuse.

Komolika finds them together again. Anurag asks her not to question him always. She apologizes to him. Prerna leaves them alone. Komolika tries to hurt Prerna. Anurag saves Prerna again. He wants Prerna to think for her coming baby and be careful. Anurag thinks of Prerna. He doesn’t know the reason. Komolika wants to kill the baby, the only connecting link between Anurag and Prerna. Keep reading for Kasautti Zindagi Kay Starplus.