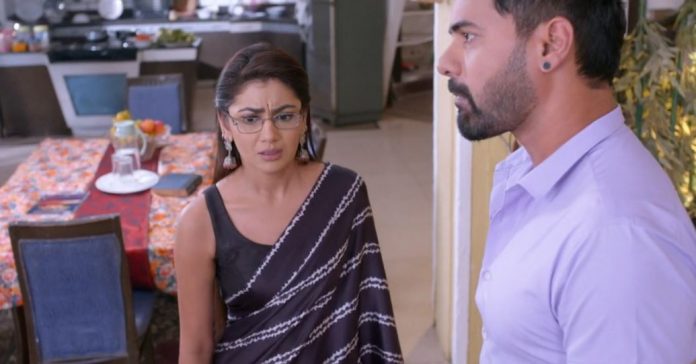 Kumkum Bhaagya Zee5 Priyanka Suicide shocks Abhigya Rishi insults Priyanka. He slaps her to teach her a lesson. He feels she is the worst chapter in his life which he wants to forget. Priyanka can’t tolerate the insult. She wants to take revenge on him. She gets back to point zero again. Ranbir doesn’t want to accept that he would fall for a simple girl like Prachi. He doesn’t want Prachi to think of him as a nice guy. He doesn’t want to become a good boys, who aren’t cool. He wants to be different. He tells Aryan that good boys are like boring people. He wants to get girls attracted to him.

He thinks if Prachi will fall for him. He wants his image to always stay the same. Aryan tells him that he can help him in staying a bad boy. He asks Ranbir not to protect Prachi as her hero again. Ranbir feels responsible towards her. Aryan tells that maybe Ranbir likes Prachi. Ranbir doesn’t want to accept this. He gets confused and thinks if Aryan is saying truth. Prachi looks for Ranbir at the college. She makes excuses in front of Shahana, who praises Ranbir. Prachi thinks Ranbir is moody and unpredictable. Shahana wants Ranbir and Prachi to become a couple.

Ranbir tells Aryan that he doesn’t like Prachi, he feels protective because she is simple. Aryan asks him to realize his feelings. Prachi doesn’t want Shahana to have silly dreams. Shahana tells her that she will propose Ranbir. Priyanka gets crazy. She wants to commit suicide to get Rishi punished. She doesn’t want to let him go away easily. She writes a suicide note for Abhi. She frames Rishi for provoking her for the suicide. She jumps down the cliff to end her life. On the other hand, Pragya reprimands Rishi for going to meet Priyanka.

Rishi reveals about Priyanka’s madness. She asks him why did he give her a chance to try this. She tells that she will talk to Abhi to stop Priyanka’s madness. She doesn’t want Priyanka to ruin Rishi’s life. Disha is upset and misses Purab in her life. She wishes that Aaliya didn’t come between them. Ritik cheers up Disha. He tells her a big secret, that’s hurting his heart. He creates suspense about his problem. Disha tries to share his problem. Ritik tells her that he wants to know about her sorrow. He doesn’t want her to stay in pain. He wants to help her out from the complicated situation. He questions her about Purab.

Disha cries and confesses about her relation with Purab. Disha tells him about her lie to Purab. Ritik calms her down. He tells her that Purab knows about her lie already that she isn’t in a relation with him(Ritik). She gets tensed. Pragya calls Purab to contact Abhi. Rishi helps her in contacting Abhi. Abhi reaches the cliff and finds Priyanka’s suicide note. He gets worried for her life. He recalls his promise and regrets. He feels he lost her. He barges into Pragya’s house to confront Rishi. He reveals about Priyanka’s suicide. It gets shocking for Rishi and Pragya. Abhi swears to not spare Rishi. He gets against Pragya for supporting Rishi. What will Pragya do now? Keep reading.