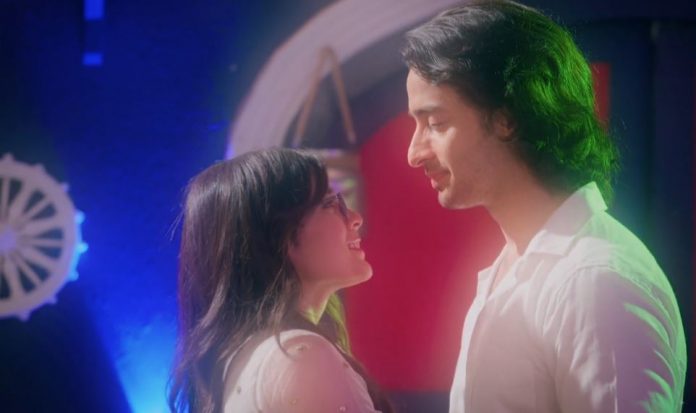 Rishte Pyar Abir Mishti part ways Meenakshi conquers Abir enquires from Parul if Meenakshi is saying the truth. Parul confesses that Mehul married her to cheat. She tells that she was pregnant when Mehul left her. She also adds that Meenakshi was also cheated by Mehul, and even then Meenakshi had always supported her. She feels indebted to Meenakshi who gave her name, better life and respect to her child as well. She tells Abir that Kunal is his step brother, but their relation will always be the same. Abir can’t believe that Mehul had cheated both of them. He feels hatred for his father. He didn’t wish to face this bad day and learn this ugly truth. He feels sorry to hurt Kunal’s heart unknowingly. Abir tries to explain Meenakshi that she is wrong to blackmail him.

Meenakshi tells him that she will reveal the bitter truth to Kunal and throw him out of her house, by snatching her surname from her. She tells him that Kunal will face dire consequences. Parul begs Abir to not let Kunal know the truth. She asks him to save Kunal’s future. She knows Abir loves his brother a lot. Meenakshi tells Abir that she had tolerated her Sautan in the house and gave name to Kunal so that he isn’t call an illegitimate. She counts her sacrifices made for the family.

She tells him that its time that he makes sacrifices for his family, he has to leave Mishti if he wants to save Kunal’s future. Maheshwaris stop the car at the same place on knowing about the blocked route. Maheshwaris take a selfie and are very happy. They don’t see Abir and Meenakshi there. Parul asks Abir to save her son’s future. She knows that Kunal will never accept her as his mother. She doesn’t want Kunal to shatter. She begs Meenakshi not to tell the truth to anyone. Meenakshi tells Abir that she had tolerated a lot without caring for her happiness, but if Abir goes away, then she will ruin everything she preserved. She wants him to leave Mishti forever. She asks him to end ties with Mishti.

She promises to ruin the family herself by making Kunal away. Abir doesn’t want Kunal to go away from them. He accepts Meenakshi’s condition of leaving Mishti. He is very much helpless. Abir shatters. He wishes that Meenakshi could understand his love for Mishti. Meenakshi is determined to break Abir and Mishti apart. She wants Abir to stand by family. Abir assures Parul that he won’t let Kunal suffer ever. Maheshwaris meet Rajvansh family. They enquire about Meenakshi and Abir. Nidhi tells them about Meenakshi’s visit to temple.

Kunal shares a moment with Kuhu. They have an emotional talk. He apologizes to her. He is ready to reveal the truth to their families and take the blame. She wants to handle the truth her way, so that her family gets more hurt. She asks him to give her another chance so that their marriage stays. Kunal ponders on her request. Abir feels lonely. He wonders why did this happen with him, that he got helpless to break his love vow to Mishti. He wants to hold the memories in his heart. Kunal comes to the temple to pick him.

Mishti decorates Abir’s room and awaits him. Abir hugs Kunal with much affection. He wants to protect Kunal. Kunal also expresses Abir’s place in his life. The brothers get much emotional. Mishti daydreams about Abir. She wants to see him soon. Abir will be breaking his relation with Mishti. He refuses to marry Mishti. It will be big shocker for Mishti and Maheshwaris. Will Mishti realize that Abir is deliberately doing this on Meenakshi’s saying? Keep reading.