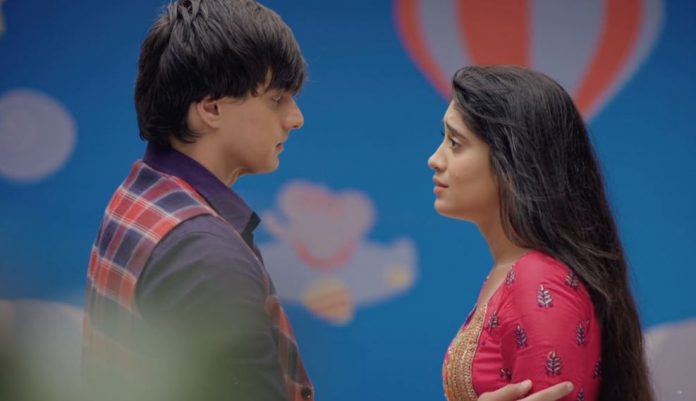 Kartik Naira Yeh Rishta Starplus Desperate romance twists Naira wants to go to Kartik and hug her. She stops herself when she finds Vedika hugging Kartik and showing her rights. She realizes that she has no right on Kartik now. Kartik too wants to hug Naira. Vedika shows that she has taken Naira’s place in Kartik’s life. Kartik and Naira feel the pain of separation again. Vedika apologizes to Kartik for creating problems for him. She feels responsible for his sorrow. Reporters question Vedika about her kidnapping. The charges on Kartik get dropped. Kartik forgives her. He takes her home. Kairav misses Kartik. Naira surprises him by getting Kartik home. Kairav gets glad to see his dad.

Naira tells Kairav that Kartik was helping the police. Kartik tells Kairav that Naira has won by fighting like a lioness. Vansh is glad to see his good friend Vedika back. Kartik tells them that Vedika is too tired and needs rest. After sending Kairav and Vansh away, he questions Vedika about her supposed kidnapping. Vedika tells Kartik that she was really kidnapped by the people involved in organ theft. Kartik wants to know why Vedika took his name and put him in trouble. Naira, Dadi and Manish also question Vedika also wants to share her trauma. She tells them that she wanted to get her dad’s picture from her house, that’s when she got kidnapped.

She tells that she was tortured for many days, she wanted to escape and come home, she couldn’t get free despite many struggles. She tells them that she managed to run away with much difficulty. She had called Kartik to take help. She was awaiting Kartik when the kidnappers found her again. Vedika sheds tears of sorrow. She had undergone a lot of pain because of the tortures by her ex. Naira asks Vedika why didn’t the kidnappers call them for ransom. Manish feels their old enemy is behind the kidnapping. Vedika tells Naira that kidnappers didn’t ask for ransom even when Kartik and Naira were kidnapped together. She answers Naira.

Kartik tells Vedika that both the kidnappings were different. He wants to know the truth. Vedika is grateful to Naira for saving her life. She feels secure after coming to Kartik. Naira tells Kartik and Vedika that Akshat helped her in saving Vedika. Kartik wants to meet Akshat and thank him. When Akshat makes an entry, Vedika gets scared. Akshat tells Goenkas that he is a mechanic and lives at the godown where he met Naira. The family finds him much hurt. Akshat tells them that he got hurt while rescuing Vedika from the kidnappers. He lies and this alerts Naira. Naira doesn’t think he got hurt. She feels she shouldn’t doubt on someone helpful.

Akshat does a drama to stay back in Goenka house. Goenkas calls a doctor to help Akshat. Akshat gets his wound treated. He gets thanking Goenkas for their generous help. He still acts ill, which makes Kartik offer him a stay in the house. Kartik asks him to stay until he gets on his feet completely. Akshat tells them that he lives all alone while his family lives far in his village, he is helpless to earn a living for family. Kartik sympathizes with him. He feels Akshat is a real gem at heart. Naira starts feeling otherwise, when she finds Vedika getting scared of Akshat. She wants to be sure before reacting. Akshat settles in the guest room.

Vedika evaluates why Akshat helped Naira and came home. She realizes that Akshat has come to stay. She is worried that Goenkas will know about Akshat and her relation. Akshat wins the truth of the family. He enjoys his stay. He is sure that Vedika won’t be able to run away now, since he has come in her own private space. Kartik and Naira have a romantic moment. Kartik expresses that he really wants to hug Naira and thank her. He hugs her and doesn’t want to break the hug. He expresses his feelings for her. He feels just she could have risked her life for his sake. Naira finds his feelings getting wrong. She reminds him about Vedika and distances him.