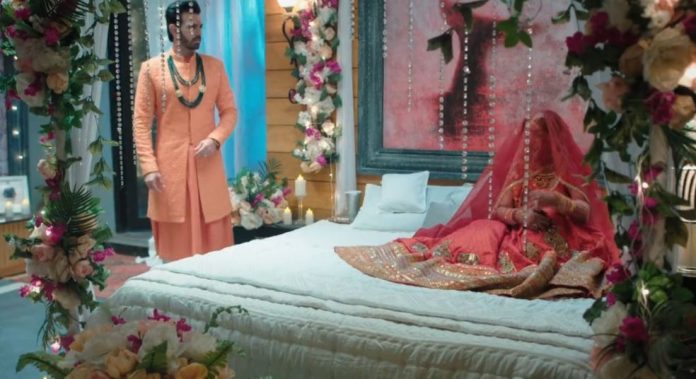 Kahaan Hum Ronakshi nuptial night gets twisty Rohit and Sippys welcome Sonakshi in the family. They apologize to Sonakshi for not getting her inside the house. They realize their mistake that they went with Rohan. Sonakshi understands that they were worried for Rohan. She doesn’t feel bad. She is happy to see their family bonding. Veena welcomes Sonakshi by following all the rituals. Veena showers love on Sonakshi. She wants Sonakshi to fulfill all their customs and rituals. Sonakshi gets much love from Sippys. She meets Rohan and checks on his health. Rohan tells her that he is getting fine. Pari visits Rohan out of concern. Rohan makes Tanya away for a while.

He is angry on Pari since she was faking her friendship with Akhil. Pari shows her concern and melts his heart. He asks her to keep visiting. Pari promises to come again. On the other hand, Raima feels it will be wrong to stay with Sumit in his house. Sumit asks her not to overthink and just be comfortable. He assures that they will be friends, he won’t expect any relationship. He knows that her life has been tough ever since she came out of coma state. He wants to support her. He asks her to settle well and then she can think of a different accommodation. Raima gets convinced once again. She feels he is a genuine person, who likes her.

Meanwhile, Rohit explains Rohan about his medication. He is much worried for his brother. He wants Rohan to get fine soon. Akash, Yash and Ajit ask Rohit to think of his first night instead looking after Rohan. Rohan too wants Rohit to go to Sonakshi. Rohit becomes a dutiful doctor and brother first. The Sippy men give some tips for Rohit’s first night. They ask Rohit to dominate Sonakshi on the first night itself so that he can rule in the marriage forever. Rohit doesn’t have any such thought to rule her. They boost up Rohit to show that he is the man of the house. They don’t want Rohit to become a henpecked husband.

They train up Rohit so that he doesn’t fall nervous. Vimmi watches them and heads to meet Sonakshi. She also lends some tips to Sonakshi, so that Sonakshi has an upper hand in the marriage. She asks Sonakshi to never let Rohit dominate. She wants Sonakshi to prove it to Rohit that she is going to be the ruling queen. Sonakshi comes in Vimmi’s words. She falls nervous. Vimmi asks her to be a lioness and just think of victory. Sonakshi really wants to test if Rohit will act weird and come in Sippy men’s words. She tells Vimmi that she will act just like Vimmi trained her. Sippy men ask Rohit to keep the name of Sippys.

Sonakshi doesn’t know how to break the ice and communicate with Rohit. Rohit and Sonakshi get odd kind of tips for their nuptial night. They both are easy going and don’t believe in dominance. After few funny moments of the unusual training, Rohit goes to meet Sonakshi. He gets mesmerized seeing her. He gets influenced by the tips. He asks Sonakshi to spare his side of the bed. She follows Vimmi’s tips, while he proves that he had come in Sippy men’s words. They argue for getting more space in the cupboard. They have a cute fight. He tells her that he can’t verbally fight if he put the veil on her face.

He wants to see his competitor. He helps her in getting off the veil. They have a romantic moment. They get peace while sharing an eyelock. They end their fight and are ready to adjust. They don’t want to dominate. Sonakshi talks to him while he falls asleep. Sonakshi finds him cute. She feels lucky to become his wife. Rohit misses the romance on his first night. He doesn’t want Sonakshi to go home for Pagphere. His instant reaction makes everyone laugh. Sippys get affected by Sonakshi’s profession. Veena gets a disturbing call. How will Sippys deal with Sonakshi’s stardom? Keep reading.