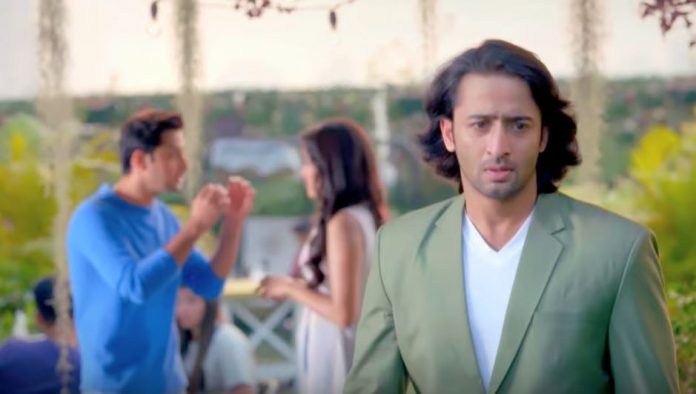 He attends the puja. He finds everyone happy. He refuses for the marriage on Meenakshi’s saying. He imagines that Meenakshi is revealing the bitter truth of illegitimacy to Kunal and family. He gets afraid. Abir insults Mishti and her family background. Kunal can’t accept the truth that he isn’t Meenakshi’s son. He gets disheartened. Meenakshi ousts Parul and Kunal from the house after insulting them well. Kunal shatters. Abir is tensed that this dream may turn true. Mishti tells Meenakshi that Abir will never get away from the family. She brings Abir close to his family.

She tells Meenakshi that Abir will always obey her. Mishti gets applauded for connecting Abir and his mom. Meenakshi can’t hear Mishti’s praise. Meenakshi indirectly threatens Abir again. She asks Kunal to come with her for an important talk. Abir stops Kunal and hugs him. He doesn’t want Meenakshi to reveal anything to Kunal. He breaks his decision that he won’t marry Mishti. He calls off the alliance and their engagement. He doesn’t get courage to reveal the real reason. He instead blames Mishti for hiding about Mehul. He tells her that she is selfish and wants her own happiness.

He questions her for not letting him know his dad’s truth and risking his mom’s life. He tells Mishti that she should have not put him in trouble this way. Mishti tells him that she broke out the truth to Meenakshi and also provided the evidences. Abir tells her that she had kept silent when she could have alerted him before. He doesn’t want to forgive Mishti for her lie. He accuses her further and insults her. This angers Mishti and Maheshwaris. Abir tells Mishti that there is no trust in their relation, there can’t be any love too. Rajshri and Vishwamber defend Mishti. Meenakshi watches the drama, since Abir plays it stern.

Mishti tells Abir that she didn’t wish to hurry for the engagement, but Meenakshi asked her to keep an eye on Mehul and not let him know their plans. She clears that she would have not gone on the engagement day if she was dying to get married to him. She had risked her life to know Mehul’s truth and get proof to Meenakshi. Abir knows she is saying the truth. He acts as if he doesn’t believe her. Mishti tells him that Meenakshi wanted her to hide the matter from him on the engagement day. Abir calls Mishti a liar.

He argues with Maheshwaris too. Mishti cries a lot when Abir breaks their relation. Mishti feels he isn’t ready to hear the truth. She is ready to apologize to Meenakshi. Abir asks Mishti not to blame Meenakshi. He doesn’t respect her. This angers Vishwamber. Kuhu takes a stand for Mishti. She feels sorry for Mishti’s heartbreak. Abir calls it over. He leaves Mishti shattered. There will new entries in coming leap sequence.