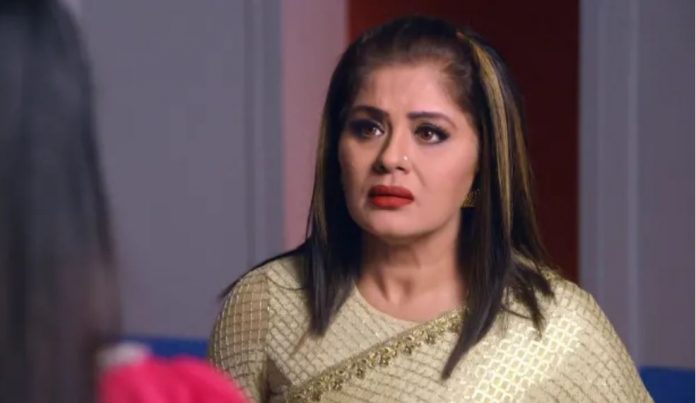 Yeh Hai Mohabbatein Sudha Ishita reveal secret plan Ishita panics when she finds Raman’s state deteriorating. She requests him to come back to her. She asks him to break out of coma and support her. She tells him that she needs him a lot in dealing with their families. She feels guilty that she is playing with her family’s emotions and beliefs. She has made Shardul take Raman’s identity in the family and business. She didn’t wish to take this step. She tells him that she misses him a lot. She tells about her emotional trauma when she finds her family connecting to Shardul as Raman.

She feels responsible for cheating the entire family. She tells him the irony of life, since she is hiding him in the same clinic which he had built to gift her. Raman hears her emotional speech in the state of coma. He reacts impulsively. She asks the nurse to call the doctor immediately for his check up. Nurse fails to neutralize Raman. Ishita gets rushing to arrange the doctor.

Sudha meets Ishita to calm her down. She gets the doctor to stabilize Raman’s condition. Ishita gets thankful to Sudha for getting the doctor on time. Elsewhere, Arijit is grateful to Shardul for saving his life from Bhallas by informing him their plans in time. He tells Shardul that he is happy that Neeti is recovering under Mihika’s care, but still he wants Neeti away from his enemies. He wants Neeti in his house.

Shardul tells him that Mihika is caring for Neeti so well that Neeti’s recovery has speed up. He thinks Neeti won’t be at any risk in Bhalla house. He fears one thing, that Neeti will identify him as her uncle if she gets completely fine. He asks Arijit to shift Neeti soon. Arijit doesn’t understand how he would do this. He plans to kidnap Bhalla member to blackmail Ishita. Shardul doesn’t think this plan would work. He tells him that Ishita is mentally strong and won’t get afraid. He knows that she is emotionally weak, and they have to hit on her weak link to make her admit about Raman’s location.

He asks Arijit to make a plan to take advantage of Bhallas’ emotions. He is sure that Ishita will get compelled to tell the family that Raman is alive. He thinks this way they can know Raman’s location and kill him. Arijit wants to kill Raman and end the revenge chapter, so that he lives with Neeti in peace. Shardul supports him. Moreover, Ishita shares her sorrow with Sudha. She feels she has lied to the family so much that they will never trust her. She thinks she has done wrong to get Shardul accepted in Raman’s place.

She feels she won’t even get their forgiveness. Sudha tells her that she didn’t do any mistake in protecting Raman from the attacker, she was helpless to lie to the family for a solid reason. She assures Ishita that the family will understand her concern and forgive her.

Sudha asks Ishita not to fall weak. She asks her to gain strength by recalling the old times when Raman and she fought their enemies. She wants Ishita to fight this battle alone to save her love Raman. Ishita feels indebted to her. She recalls meeting Sudha and getting her help in taking Raman to the hospital. Ishita had revealed to her about the huge danger on Raman. Sudha had helped Ishita in keeping Raman at the secret place and save him from enemies.

Doctor broke the news to them about Raman’s coma state. Ishita decided not to tell the family about Raman’s survival, while Sudha takes the responsibility of helping Raman. Ishita is also thankful to Shardul for helping her so much. Shardul makes a plan to find about Raman. He announces Karan and Ruhi’s marriage. Ishita and Sudha get worried, since real Raman is away. They want Raman to recover soon. Shardul thinks close to meet Raman.