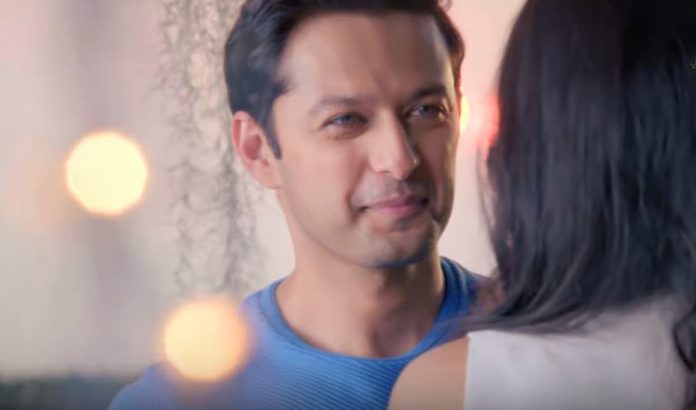 Rishtey Pyar Starplus Vatsel Seth Helly Shah New story begins post the leap. Mishti misses Abir. She doesn’t know why did Abir insult her and end their relation. She wants her answers. Kuhu asks her to stay with family. Mishti tells her that Abir is her love, he loved her a lot, there is some reason that he is behaving so weird. She tells that she will not give up on her love. She wants to meet him once and know the reason. Mishti breaks down. Kuhu can sense this and feels sorry for Mishti. Rajshri reprimands Mishti for thinking to meet Abir. She wants Mishti to keep her self esteem. She is much hurt since she didn’t expect Abir to insult Mishti this way.

She can imagine the pain Mishti is going through because of her dreams shattering. She clears to Mishti that none will allow her to meet Abir. Mishti begs her to let her meet Abir once for her to get a clear closure. Vishwamber understands Mishti’s restlessness. He is sure that once Mishti faces Abir, she will be left only with a broken heart. He wants Mishti to accept the bitter truth. He tells the family that if he stops Mishti, then she may slip into a denial mode.

Meanwhile, Kunal wants to ask Kuhu about Mishbir’s break up. He thinks even Kuhu won’t be knowing it, since Abir has taken this shocking decision. He goes to ask Abir about it. Abir plays his normal self in front of Kunal. He hugs Kunal and asks him to be with him always. He tells Kunal that its good for the family that he isn’t marrying Mishti. Kunal tells that he was ready to accept Mishti in the family and didn’t expect this. Abir asks him to forget the happenings. His casual behavior worries Kunal further. Mishti tells Kuhu that Meenakshi might have brainwashed Abir or threatened him.

She wants to confront Abir for deciding their fate all alone. Kuhu wishes that Mishti accepts the reality or convinces Abir for the marriage. Mishti wants to know what is Abir hiding from her. Mishti promises Vishwamber that she will never meet Abir if he rejects her love today. Vishwamber has no hope that Abir will change his mind. He burns the wedding invite. He tells everyone that he will never get Mishti married to Abir, even if Abir comes to beg them. He didn’t expect Abir to cheat them this way. He wants to support Mishti in the moment of her painful heartbreak. Mishti prepares to meet Abir.

She finds Abir at his favorite hangout. Abir tries to make Mishti away from him. Mishti puts efforts to know his feelings. She tells him that he still loves her, she can sense his feelings. Abir acts to fight with her to break her heart. She tells him that she can know him more than himself. He blames her for the cheat. He hurts her with bitter words. She tells him that she won’t leave him even on his saying. After much humiliation, Abir takes away his gifted locket. He tells her that their relation doesn’t matter to him. Mishti gets heartbroken after her failing attempts. Abir feels her pain.

He wishes that she forgets him and settles with a better guy. He sinks in sorrow. Mishti knows that Meenakshi has done this to separate Abir and her. She warns Meenakshi about her dirty games. She tells that one day Meenakshi will lose both her sons. Mishti heads to London, while Abir yearns for her. Kuhu will be running an event management company. Abir and Mishti will be meeting after the leap. Rishtey Pyar Starplus Vatsel Seth Helly Shah add big twists.