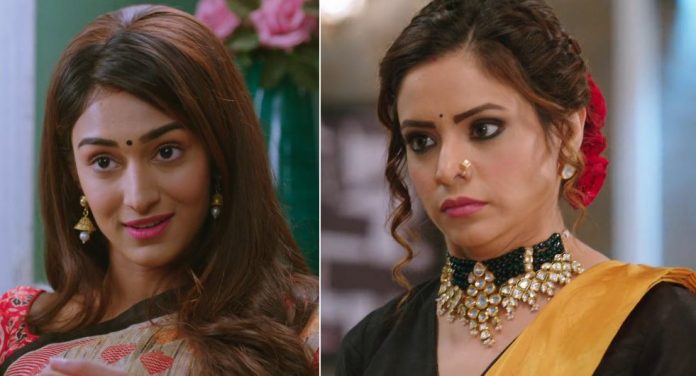 Kasautii Starplus Today Latest Prerna slap stuns Komolika Anurag wants Prerna’s family to look after Prerna until her husband returns to look after her and the baby. Prerna tells Veena that nothing such happened in the function. Veena gets worried for her daughter. Anurag returns home, while Komolika is eagerly waiting for him. She gets enraged that Anurag is still after Prerna. She thinks Prerna deserves to die, since she is coming in between Anurag and her once again. She wants Anurag’s love, failing in her plans, she madly wants revenge on Prerna. She behaves like a long lost terrible spirit.

On the other hand, Prerna is in peace that Anurag cares for her, despite the fact that he doesn’t remember her. She just wanted Anurag to stay fine and happy. She wants to protect him from Sonalika, if she is really Komolika. She tells Shivani that none will believe them if they claim that Sonalika is Komolika. Shivani gives some ideas to expose Sonalika’s truth. Prerna wants to gather proof first and then unveil Komolika. She thinks it will be better if she finds Sonalika’s connection with Ronit. Shivani tells her that she can take her to Ronit’s house. The sisters plan to spy on Ronit. Prerna wants to throw out Komolika from Anurag’s life.

Prerna and Shivani reach Ronit’s house and find him going out somewhere. They cleverly trick him and make an entry in his house. They try to find out his connection with Sonalika. Ronit forgets his phone at his home. They try to check his phone. He returns to get his phone. He suspects their presence when he finds his phone at another place. Before he could check on them, they run away to hide at some other place. Ronit meets his in-laws who insists him to call his sister home. Ronit calls Komolika to fix their meet. He fails to get through, since she is busy in helping Anurag.

Komolika tries to help Anurag in finding his lost file so that she spends time with him. He shows his least interest and leaves her in frustration. She seeks help from Prerna to find the file. Prerna’s doubt on Komolika get more certain. Ronit wants Komolika to perform the rituals in his engagement. Prerna and Shivani get his engagement invitation card. They realize that Ronit’s sister will surely come to perform the rituals. They make a plan to catch Komolika red-handed.

Prerna tells Shivani that Ronit and Komolika are loyal towards each other, they really love each other and this will make Sonalika attend his engagement. Prerna lays a trap for Sonalika. Ronit requests Komolika to be there on time. Komolika promises him that she will be with him and complete the rituals, being his own sister. Anurag calls Prerna to get her welfare. He doesn’t speak and still she understands his silence. He calls again to talk. Prerna’s love for Anurag gets evident to Shivani. Prerna questions Anurag about their relation.

This leaves Anurag thinking. Prerna takes a dancer’s disguise to enter Ronit’s engagement party. She catches Komolika red-handed while the latter performs the ritual. She slaps Komolika and reprimands her for the huge deceive. Komolika plans to kill Prerna right there to stop her truth from reaching Basus.