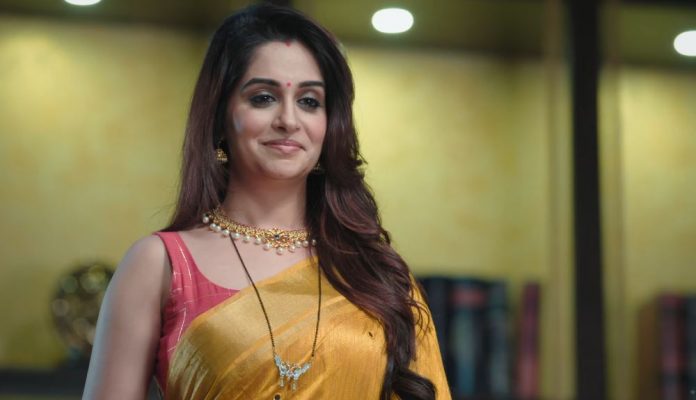 Kahaan Hum Upcoming Today Sonakshi Stuns Sippys Sonakshi is worried that Veena would get disappointed with her. She wants Rohit to talk to Veena and explain her problem. Rohit assures that he will explain Veena well. He misses to talk to Veena. He rushes to the hospital for an emergency. He learns about Preeta, the little kid, who is in a critical state post the surgery. He wants to save Preeta’s life. Veena finds him busy in work. She wants Sonakshi to be home before Sundari arrives. She is stressed that Sundari will humiliate her if anything falls short. She wants everything to be perfect. She takes Tanya for shopping. She tells Tanya that she wants to showcase her perfect Bahu Sonakshi to Sundari.

He goes to operate her. Suman informs Veena that Sonakshi had gone for the shoot, since she just had two day off for the marriage functions. She wants Veena to understand about Sonakshi’s work needs. Veena is upset that Sonakshi didn’t tell her anything. Suman tells her that Rohit wanted to talk to her. She defends Sonakshi. She tells Veena that Sonakshi isn’t at any fault. Veena wants to meet Sonakshi and get her home. She is sure that Sonakshi will obey her. She sends Tanya to the hospital to pick up Rohan.

Meanwhile, Rohan spends time with Pari. He is glad that Tanya is busy today. Tanya calls him to enquire about him. Rohan lies to Tanya so that he gets a chance to romance his girlfriend Pari. He lies to Tanya that he is with Rahul. Tanya wants him to be home before dinner and meet Sundari. Rohan and Pari plan an outing. Sonakshi wants to wrap up the shoot soon so that she can go home. She is stressed that Rohit couldn’t talk to Veena. She calls Rohit to get an answer. He states his work emergency.

When she insists, he vents out anger on her. Rohit tells her that he has to save his patient and can’t waste time on other things. Sonakshi understands his work needs. She wants him to understand her too. She requests Netra to let her fulfill her word to Veena by going home early.

Netra asks her to give time to the show for which she left her wedding. She asks Sonakshi to be serious about the show. Sonakshi goes on insisting, which angers Netra. Netra asks her to decide her life’s priorities. She lets Sonakshi go since she can’t force her to work. She asks her to make a choice, and know what’s more important for her, either her work or her family. Sonakshi gets confused and understands Netra’s anger. Sumit happens to know Sonakshi’s problem. He thinks to help Sonakshi. Veena is in stress again.

Akash and Sukhmani try to relieve Veena. Veena wanted Sonakshi to come on time and meet Sundari. Naren cracks jokes on Sonakshi. He doesn’t think that Sonakshi can fit into the ideal bahu tag. He thinks its better to let Sonakshi work, else Suman will get the media home. Rohan and Pari get sighted by a cop. They don’t want to get caught romancing. Pari is afraid of Suman’s anger. Rohan feels his marriage will end if Tanya knows about his affair. Pari and Rohan end up arguing. Pari commits an accident, shockingly.

Rohan gets more worried. He fails to reach home. Sundari meets Sippys. She insults every member of the family, except Naren and Veena. She tries to humiliate them by expressing their weak links. Veena feels odd. Sundari boasts of her daughter-in-law Shweta. Sundari wants to meet Sonakshi. She insults Veena over Sonakshi’s absence. Sonakshi shocks Sundari by giving her a good answer. Sundari wants Veena to keep Sonakshi in control by fear. Sonakshi doesn’t think that Veena will do that.

She tells Sundari that she has always seen Sippys believing in the power of love, than fear. Sonakshi’s arrival and prompt reply stuns Sippys. Sundari gets upset and feels Sonakshi is insulting her. She gets another chance to taunt Veena. Will Sonakshi portray herself as a perfect bahu and keep Sippy’s pride? Keep reading.