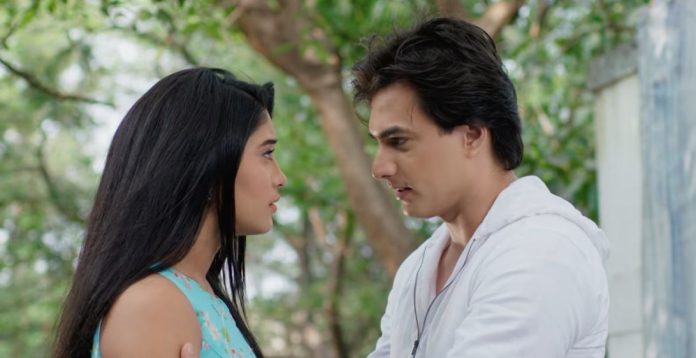 Yeh Rishta Starplus Latest Time for big confessions Vedika reveals past Kartik has all his focus on his ex-wife Naira. Vedika tries to be around him and bond, but he doesn’t pay attention to her. Kartik is lost in Naira and his old and gold memories. He wants Naira in his life. He wishes that she becomes his wife again. He wants to divorce Vedika and free her from the unwanted marriage. He knows he is sounding selfish, but he will be unfair with Vedika to give her false hopes. He finds Naira playing cheerfully with the kids. He wants to spend time with her. Kairav asks him to choose any one thing in the game. Kartik tells him that he also wants to choose his favorite person, but he is confused.

Kairav helps him subside his confusion. He doesn’t know what Kartik is talking about but indirectly helps him. He advises Kartik to follow his heart and then he will be taken to the right choice. Kartik gets glad that his son has unknowingly guided him. He closes eyes and just follows his heart which takes him to Naira. He gets more into Naira’s memories. He wants some positive sign that he isn’t doing anything wrong as Naira told him. He gets a good sign when a little girl in tiger costume just like Naira comes to him. He thinks its a sign that Naira will come back in his life. He wants to put efforts to make this sign true.

He gets his answers. He loves Naira. He knows Naira also loves him. He feels none can come between them, there won’t be any misunderstanding or third person like Vedika. He doesn’t want the separation to get long. He wishes that Naira accepts his love. He shouts his love to Naira, which reaches her through his heart. Kartik wants to end his bad memories when he was away from Naira. He spends the night in erasing the bitter memories. The family clicks their pictures after the party ends. They find Kartik missing and wonder where is he.

Akshat tells them that he will go home to receive some of his relatives. He is compelled by Vedika to leave from the house. Naira finds their connection strange. Vedika protects Kairav. Kartik limits himself by thinking of the sorrow which he will put in Vedika’s fate. He gets clear of what he wants in his life. He doesn’t want Vedika to stay in the marriage when he can never accept her. He decides to go to Naira and confess his love. He doesn’t think sacrificing his love will be a wise option. He wants Naira, not her memories. Kartik gets super joyed with the dream of his union with Naira. Vedika is troubled with the thought that Akshat was harming Kairav.

She feels bad that she cheated Kartik. She wants to tell her past to Goenkas. Kartik runs to meet Naira. Naira sends the kids to meet their friends. She doesn’t know about Vedika’s problem. Vedika meets Kartik to tell him about Akshat. Kartik apologizes to her in advance. He tells her that things aren’t in his control. He wants to be with Naira. Naira also realizes her love for Kartik and controls her feelings.

Vedika doesn’t understand why Kartik is apologizing. Naira doesn’t want to come between Vedika and Kartik. Kartik happily lives his new life and confesses love to Naira. Both Naira and Vedika are left in shock. Vedika will bring out her past in the coming track, post which Naira learns about Kairav and Vansh’s kidnapping.