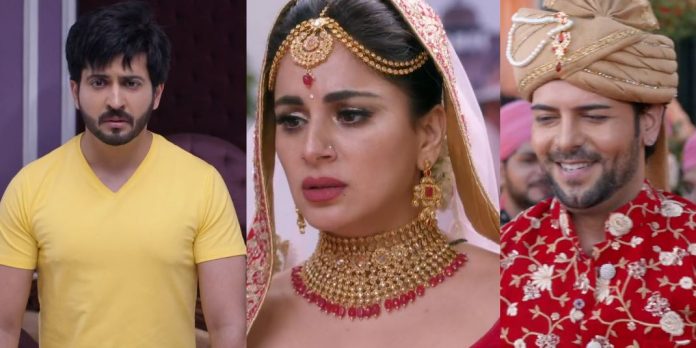 Kundali Bhagya Today Wedding Bells for Preeta again Rishabh wants Karan to meet Preeta and get her home. He knows that Karan isn’t happy without Preeta. Karan tells him that he isn’t happy as Preeta is marrying Prithvi, he can’t lose to Prithvi. He tells Rishabh that he isn’t free to meet Preeta and talk to her. He tells Rishabh that he is just concerned to defeat Prithvi. Rishabh asks him not to lie to himself and realize his feelings. He reminds Karan the marriage date. He tells that Preeta is marrying on the same day. Karan gets a shock realizing that its just few hours left. He makes an excuse to leave from the house. Rishabh wants him to act fast and reach Preeta.

Shrishti hopes that Karan comes and stops the marriage. Preeta reads her thoughts. She doesn’t think Karan will come and stop her marriage with Prithvi. Rishabh is clear that Preeta won’t come to stop Karan’s engagement, Karan himself has to take the initiative. Sameer gets ahead with the arrangements. Kareena wanted Karan and Mahira to visit the temple and attend the puja. She wants to talk to Rishabh at least. She instructs Sameer to take Karan to the temple. Rakhi informs Kareena that they are at the temple and started the puja.

Kareena assures that she will send Karan soon. Rakhi is upset that Preeta is marrying Prithvi. She feels she is losing Karan’s happiness. She didn’t wish Karan and Preeta’s marriage to end this way. She lies to Kareena and hides her worries. She makes prayers for her children’s happiness. Sameer doesn’t find Karan and Rishabh. He learns that Preeta is marrying Prithvi. He wonders why didn’t Shrishti tell him about the shocking thing. He gets upset on Shrishti. He learns that Karan and Rishabh have gone to stop the marriage. Rishabh accompanies Karan to stop the marriage. He tricks Karan to make him accept that he is going to meet Preeta.

He wants to make Karan realize his feelings. Karan asks Rishabh not to act smart. Rishabh is happy that Karan is considering to meet Preeta. Later on, Sarla awaits the groom. She gets tensed that Prithvi didn’t arrive. She wants the baraat to come on time. Shrishti asks her to relax, Prithvi will come. She doesn’t want Sarla to spoil her health. Sarla wants to know why is her daughters trying to contact Prithvi. She suspects their intentions. Prithvi happily gets the baraat. Sarla gets glad to see him. She thanks his mom for forgiving them for the last time incident.

She blesses Prithvi. Janki and Shrishti plan to take Prithvi to Preeta to that Preeta convinces him. Sarla asks Shrishti to attend the guests. Rishabh asks Karan not to explain, they aren’t going to stop Preeta’s marriage. Karan drives to the marriage venue to stop Preeta and Prithvi’s marriage. Rishabh asks him to admit it that he can’t let Preeta marry anyone. Preeta wants to make Prithvi back out from the marriage. Will Karan stop Preeta’s marriage by siding his ego? Keep reading.