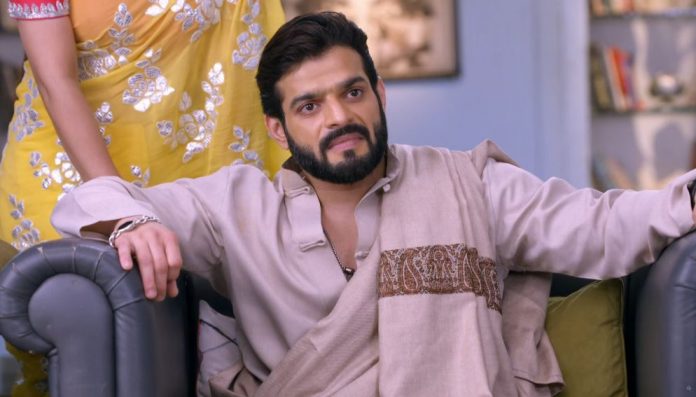 Yeh Hai Mohabbatein Challenge time for Ishita Raman Raman gets anxious to know the unfortunate happenings with him. Ishita calms down Raman so that he doesn’t hurt himself. She gets him into a stable state. She goes to inform Sudha that Raman is out of the coma state. She learns that Sudha has left for London and will surely find about Neeti. She feels indebted to Sudha, who is responsible for Raman’s secret medical treatment. She hopes that Sudha finds about Neeti and helps them solve the mystery. Raman wants to know about the family. He wants to see them, talk to them and spend time with them.

Ishita tells him that none had come to see him since he doesn’t exist for them now. He gets puzzled on hearing it. She tells him that she had made her friend Shardul take his place in the family to save him from the hidden enemy, and now Shardul is Raman for everyone. Raman can’t believe her drastic step. He wants to know the reason behind her step. He tells her that he doesn’t remember anything about his accident. He wants his answers to calm his mind. Ishita promises to tell him the truth if he doesn’t lose his cool. Ishita slowly shares the series of events that occurred after his kidnapping.

She also reveals about the deadly attack on him, which could have taken his life. She explains the need to get Shardul as Raman into the family. She had done everything just to save Raman’s life. Raman begins to understand her concern behind her step. He tells her that he had stayed in coma for a couple of months, but now he wants to go home where his family resides. She fails to convince him to stay back and get his treatment completed. She calls a doctor urgently. Doctor examines Raman and gives the good news to Ishita that Raman is completely stable now. He allows her to take him home if he is too insisting. Ishita makes arrangements with the nurse to take Raman home.

Shardul tells the family that he is worried for Ishita, since she maybe in trouble. He promises the family that he will find Ishita and bring her home. He rushes to meet the police commissioner and lodge the missing complaint. Karan and Yug accompany him to find Ishita. Ishita tells Raman that Sudha and Shardul helped her a lot in her plan. Raman feels fortunate to get a wife like Ishita. He supports her. Ishita brings Raman home, which comes as a big shock for Bhallas. Sanjay learns about Raman’s identity when he spies on Bhallas by an excuse. Raman meets his family and gets emotional. He gets their love once again, but it comes with a doubt.

The family wants to know who was the person living between them as Raman. Ishita clears out that she brought Raman home and her friend Shardul was living as Raman for a purpose to protect Raman from enemies. Sanjay informs Arijit that Ishita brought the real Raman Bhalla home. Arijit gets panicking with the news, since his revenge is left unfulfilled. He doesn’t want Raman to meet Neeti and terrify her by reminding the accident. He gets worried for his daughter’s welfare. He wants to get Neeti out of Bhalla house.

Arijit tries to contact Shardul and inform him about Raman. Shardul misses his calls. Shardul gets angry that he isn’t able to find Ishita. He returns home with Karan and Yug. He learns that Ishita has returned. Ishita tells the family that Shardul was living with them as per her plan to protect Raman. The family reprimands Ishita for playing with their sentiments and hiding such a big truth about Raman from them. They vent anger on Ishita without understanding her great intentions. Ishita bears it all, but luckily gets Raman’s support.

Raman convinces the family that whatever Ishita did for to save his life and none can judge her for it. Shardul receives a big shock on meeting Raman. Ishita introduces him as an angel for them, but gets a shock when he challenges Raman’s identity. Ishita can’t believe it that Shardul is picking up Raman’s identity for an unknown motive.