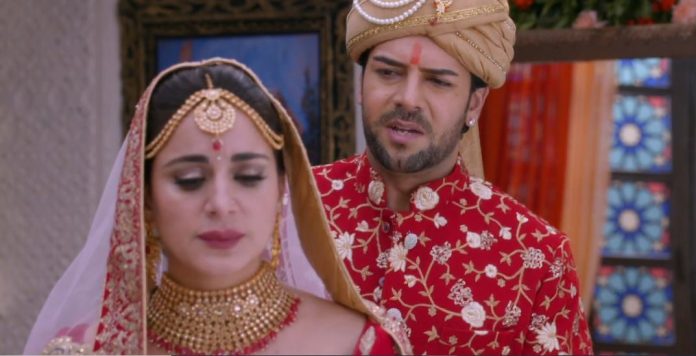 Kundali Bhagya Preeta declaration Prithvi promising plot Janki tells Preeta that she will support her, against Sarla. She asks Preeta not to marry Prithvi. Preeta gets glad to get Janki’s support. Janki encourages her and asks her to be fearless. She is ready to bear Sarla’s anger. Sameer wants to talk to Shrishti and get his answers about Preeta’s marriage with Prithvi. Kareena asks him why is he angry and on whom. He tells her that he is angry on himself. She asks him about Karan. Prithvi goes on impressing Sarla and Biji by his humble behavior. He acts sweet like before.

Karan denies that he had come to the marriage venue for Preeta. He buys some mineral water from the stall. He wants to see Preeta. Rishabh asks him about planning to get inside. Karan gets angry when the stall vendor talks about the marriage. Rishabh teases Karan. He wants Karan to realize his mistake and just accept it. Karan denies to have feelings for Preeta. Rishabh asks him to call Preeta and stop her from marrying Prithvi. Karan refuses to him. Rishabh tells him that this idea is the best.

He tells Karan that he has to attend a conference call. Karan gets upset. He recalls Preeta’s number. Prithvi’s drama goes on. He becomes Preeta’s groom for the second time. Janki gets Preeta to Prithvi. He gets mesmerized with her stunning bridal look. He can’t stop praising her. She tells him that she needs to talk about their marriage. She wants him to deny for the marriage. Karan calls her. She gets into her ego mode and disconnects his call. This rages Karan. Karan buys all the betel leaves so that Prithvi’s baraatis don’t get any. Karan tells Rishabh that Preeta had disconnected his call.

Mahira completes the puja. She awaits Karan. Rakhi doesn’t know about Karan. Mahira and Ramona worry that Karan isn’t at home. They suspect that he has gone to meet Preeta. Ramona tells that Preeta is still Karan’s wife. Mahira knows Karan hates Preeta and wants to get rid of her. Ramona doesn’t think so. Preeta questions Prithvi for avoiding her and not taking her consent for the marriage. Prithvi lies to her about his phone. She tells him that she doesn’t ant to marry him. This shocks Prithvi. She tells him that she was clear of her decision, that she can’t marry her.

She confronts him for deciding for the marriage. He tells her that he had left the decision on her. He tells that he had told this clearly to Sarla that marriage will happen by Preeta’s consent.

She tells him that she gave the consent and lied just to save Sarla’s life. She asks him to refuse for the marriage if he cares for her. She tells how much Sarla matters to her. He tells her that he agreed just for Sarla’s sake. Preeta wants him to tell Sarla that he changed his mind and doesn’t want to marry now. She tells him that she was going to leave from the mandap, since she is already married to Karan.

She regards herself as married. She tells him that Karan did wrong with her, Sarla dislikes him, but truth won’t change. She states that Karan is her husband. Shrishti records their conversation. Prithvi agrees to call off the marriage for the sake of Preeta’s happiness. He tells her that he values Sarla and her. He tells that Sarla will hate him for backing out in last minute, but he is ready to tolerate her hatred.

She apologizes to him for hurting him. He gets angered. He feels he can’t lose to Karan. He wants to compel Preeta indirectly for the marriage by brainwashing Sarla. He promises Preeta that he will not marry her. She is grateful to him. He thinks of blackmailing Preeta by using Sarla.