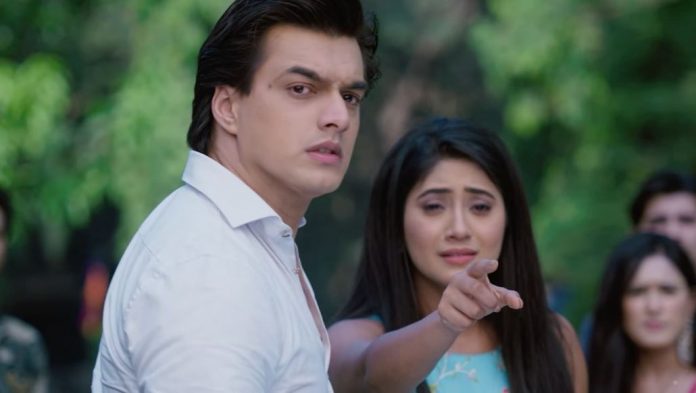 Yeh Rishta Unthinkable shock Kartik Naira StarPlus Goenkas support Vedika and also apologize to her. They appreciate her courage that she told them the entire truth about Akshat to save her family. They are happy that she didn’t get scared of anything. They call Vedika brave. Vedika is glad that Kartik and Goenkas are backing her up. She didn’t expect them to take the matter so light and forgive her. Naira makes Kartik pacify Vedika. She gets back knowing Kartik is married to Vedika. She avoids Kartik’s feelings. Elsewhere, Vansh and Kairav play in the park. Kairav goes to pick up the football. Akshat hides behind the bushes and awaits Kairav.

He catches Kairav and ties him up. He takes Kairav with him, while Vansh waits for Kairav’s return. He wonders where did Kairav go that he got so late. Kairav goes missing suddenly. This worries Vansh and also Goenkas staff. Vansh informs Naira and Kartik that Kairav has disappeared from the park. This shocks Naira the most. Naira tells Goenkas that Kairav is nowhere and Vansh is crying. The family can’t believe the threat on Kairav. They rush to the park to find Kairav. They don’t find Kairav anywhere. Vansh tells them that Kairav went behind the bushes and didn’t come back. They realize that Akshat has kidnapped Kairav.

Naira breaks down since Kairav is too little and can’t defend himself. She asks Kartik to save Kairav and get him back. She turns weak due to the emotional break down. She pleads Goenkas and Singhanias to find Kairav. Vedika gets Akshat’s bracelet and tells Kartik that Akshat is behind the kidnapping. She feels guilty that she didn’t alert the family about Akshat before. Goenkas seek help from the police. Akshat rushes away with Kairav. Vedika sees Kartik and Naira shattered. She feels really bad. Kairav gets lucky to get Akshat’s phone.

He calls Vedika to talk to family. Kartik and Naira happen to see kidnapped Kairav in tears, asking for help. They get panicking. Akshat stops Kairav and takes him to his hideout. He is sure that Kartik won’t be able to track her. Naira tells Kartik that Kairav was inside the icecream stall storage box. She finds the abandoned stall. She tells Kartik that the kidnapper has already taken Kairav away. Kartik and Naira shed tears of deep sorrow. Kartik promises to get Kairav. Naira wants her son at any cost.

Police tries to figure out Kairav. Akshat makes a ransom call to Kartik. Naira threatens of killing him if he harms Kairav. Akshat tells them that he also has much anger, he can vent it out of Kairav if she angers him more. He demands the ransom.

He tells them that he can torture Kairav. Dadi asks Kartik to pay the money and find Kairav. She tells them that she just wants Kairav back. Naira tells that Akshat may take money and cheat them. Kartik doesn’t want to take any risk since money doesn’t matter to him. Dadi angrily scolds Vedika. She feels Vedika is responsible for this. Naira asks Vedika to come with them for meeting Akshat.

Samarth asks Kartik and Naira to go alone and not anger Akshat. Naira prays that Kairav stays fine. Akshat guides them to walk ahead and keep the money bag for him. They don’t find Kairav. Akshat fools them. He wants his revenge on Vedika. Vedika finds Kairav in deep trouble. Kartik and Naira learn the threat on Kairav. They get into action mode to protect their son. Kartik will heroically save Kairav.