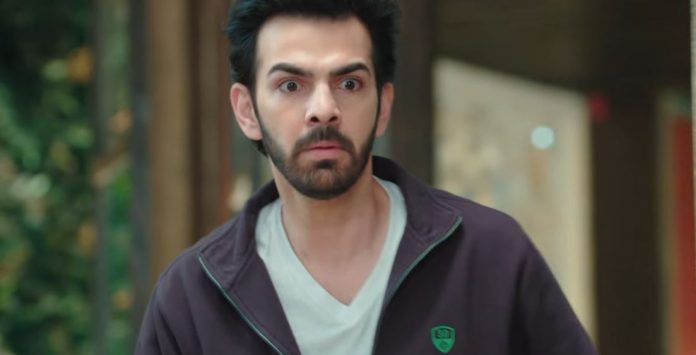 Kahaan Hum Rohit unexpected anger blasts Sonakshi Rohit wants Sonakshi to obey the family’s decision and not oppose it again. He tells her that they will not tell anything to Pooja until Nishi comes. He wants her to not ask anything further. She tells him that she is sure that he has kept some secret, which is making him react impulsively whenever they talk about Pooja’s adoption. She thinks if he is aware of Pooja’s parents. He asks her to stay busy with her friend. He doesn’t want Sonakshi to dig up the past. Pari overhears them and realizes that Pooja is adopted by Sippys. She gets glad to take a chance to take revenge on Pooja for the slap. She is angered that Pooja insulted her parents.

She pities Pooja who doesn’t even know about her parents. She plans to strike at Pooja’s weakness, her identity truth. Rohit tells Sonakshi that he will always protect Pooja’s truth. Pari contacts the same journalist to give the breaking news of Pooja’s adoption. Later, Sonakshi finishes the shoot. She is disturbed about Pooja’s truth. She wants Rohit to share things with her. She meets Netra to make a request. She tells Netra that she is married now and wants to give good time to her family. She is working since childhood, but doesn’t want to quit. She wants to make her relations stronger with Sippys.

She wants to balance her relations and work, so that she can have happiness and harmony. She wants Netra to allow her to finish work soon and rush home. She asks Netra to change her schedule. She promises to work well and not compromise on the show. Netra understands her point. She apologizes to Sonakshi for getting rude towards her. She wishes Sonakshi to become a perfect bahu in real life like Parvati. Sonakshi tells the designer that she had fixed the costume and kept it the cupboard. She worries that she had kept the blouse along with Rohit’s pant.

Rohit doesn’t realize that Sonakshi’s blouse is stuck to his pant. The hospital staff laughs on seeing him. He wonders why is everyone laughing. He doesn’t learn about the blouse stuck to his clothes. He gets mistaken that he is looking handsome and everyone is happy about it. Sonakshi calls Rohit to save him from the odd embarrassment. He tells he that he has stolen everyone’s attention today, he looks stunning. She tells him that people would be laughing at his weird appearance. She asks him to show his pant. He doesn’t realize that her blouse is stuck already. After the funny conversation, he gets his pant torn.

He demands a new pant. He expresses his annoyance. Pari doesn’t want her name to get printed with the news. She wants to strike on Pooja’s confidence. She asks the journalist to print the news by including it in Sonakshi’s interview. Tapasya gets cunning to change the article to make it more shocking. She wants Sonakshi to get blamed.

She is sure that the news will work well for the newspaper. Rohit wants to check Sonakshi’s interview. He can’t believe that Sonakshi has revealed about Pooja’s adoption to the media. Yash rushes to Pooja on hearing her scream. Rohit realizes that Pooja has read the news and shattered.

He finds Pooja hurt by the glass. He quickly cares for her wound. He was assuming that she has read the news and cut her wrist as the reaction. Pooja gets glad that she has a loving family. She feels proud. Rohit and Yash get speechless. Naren gets angered on Sonakshi’s huge mistake. He didn’t wish Sonakshi to reveal the truth to media. Veena doesn’t think Sonakshi can do this. Veena asks Naren to seek an answer from Sonakshi. Rohit blasts his anger on Sonakshi without listening her clarification. What will Sonakshi do now? Keep reading.