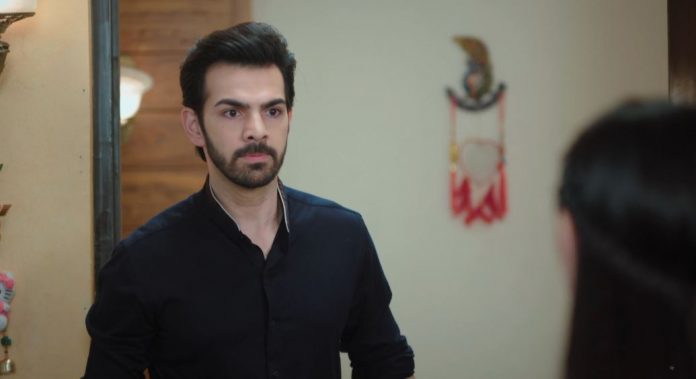 Kahaan Hum Starplus Rohit extreme step gets shocking Pooja’s adoption truth is out in front of the world because of Pari. The entire Sippy family blame Sonakshi for revealing the confidential and sensitive information to the journalist. Rohit tells Yash that Pooja shouldn’t read the newspaper or check the phone, since the adoption news is out. Yash is also worried knowing about it. He wonders how will he keep Pooja away from her phone for so long. Sonakshi gets reprimanded. She justifies that she can never harm Pooja and her dignity. She reminds that she has done a lot to protect Pooja before.

Naren tells them that Sonakshi is a tv actress and wants publicity. He tells that Sonakshi has done this purposely. Rohan tells them that Tapasya can’t publish the news without a proper source, Sonakshi has really done this. Veena also loses belief in Sonakshi. Naren asks Veena to realize her mistake. He feels nothing about the family has any privacy now. He tells them that their family matters will be topic of gossip now. Rohan also feels Naren is right. Sonakshi asks them to trust her and give her a chance to prove herself. Rohit feels bad seeing his wife plead to his family.

He supports Sonakshi. He tells them that he believes her that she can never do anything against Pooja. Naren doesn’t agree to him. He tells them that reporters are constantly after them, their privacy is totally gone now. Sonakshi tells that stars lose their privacy, but she can handle the media. Rohan blames Rohit for supporting his wife, who is wrong at the moment. Rohit doesn’t want anyone to tag Sonakshi wrong and lose belief so soon. Sonakshi tells them that she can clear the matter by calling Tapasya. Naren asks her to get the proof that she didn’t do this.

He feels bad to see his sons fighting. Rohit tells Sonakshi that he won’t hear anything from Tapasya, he will just listen to his wife Sonakshi. Sonakshi calls Tapasya to clear her name. She questions Tapasya about printing about adoption. Tapasya lies that she had printed just the truth which Sonakshi told her. She also frames Sonakshi. She tells Sonakshi that she will not accept any blames. Sonakshi fails to prove herself. Rohit wonders why did Tapasya lie. Yash believes Sonakshi since he knows her well. She takes the responsibility of handling Pooja and keeping her away from the truth.

The family doesn’t believe her, but Yash agrees to Sonakshi. He tells Rohit that he had put Pooja’s phone in water to keep her away from her friends’ messages. He tells Naren that Sonakshi can protect Pooja. Sonakshi thanks Yash for his trust. She takes Pooja to her shoot and keeps her engaged. Suman jokes on Pooja’s adoption. Sonakshi doesn’t feel good. She ends the conversation. Pooja wants to get a new phone to contact her friends. Sonakshi lies to her that Rohit has already bought a phone for her. She makes Pooja stay back. She feels she will be able to keep Pooja away from the shocking bulletin and phone.

She asks Pooja to take a break from her phone for a day. Pooja is thankful to Sonakshi and Rohit. Rohit asks Sonakshi to handle Pooja until he finds some way to sort the entire problem. He meets Tapasya and offers her sweets. He tells her that he wanted to apologize from Sonakshi’s side. Tapasya tells him that the sweets taste weird. He takes a harsh step. He scares her of cardiac arrest. He tells her that he is going to kill her if she doesn’t name the culprit behind leaking the news when Sonakshi didn’t tell her anything. Tapasya worries for her life.

When he promises to give her an antidote, she reveals the name of the culprit. She tells that Pari had told her the truth about Pooja’s adoption. He tells Tapasya that he didn’t add any poison, but just vitamins in the sweets. He tells that she should be ashamed of her selfish greed. He is angry on her for falling so low and ruining the name of her profession. He teaches her a lesson. Tapasya feels embarrassed. Rohit asks her to use her talents, job and power for helping Pooja. He goes to confront Pari for ruining their family peace.