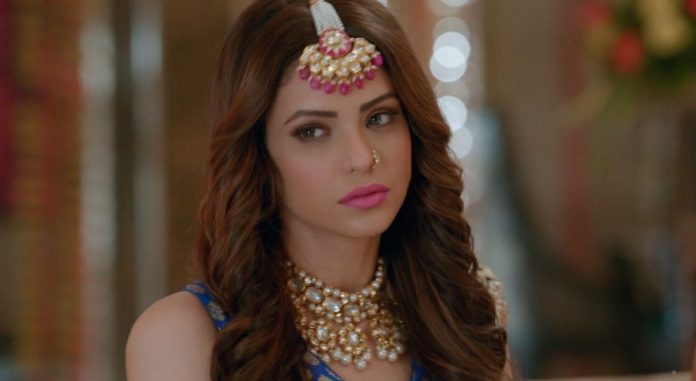 Kasautii Starplus Shocker Komolika Prerna exacts scores Prerna gets delighted when Anurag fulfills the sindoor rasam with her. Mohini and Moloy can’t believe the occurrence that Anurag had filled sindoor in Prerna’s maang and also fixes her mangalsutra. Komolika gets enraged, since she wanted to get his named sindoor. She fails once again and stays calm in front of Basus with a hope to get their sympathy. Anurag clarifies that he didn’t intend to fill sindoor, it happened by mistake and fixing the mangalsutra isn’t a big deal either. Prerna knows that its their fate. He tells that filling sindoor doesn’t mean he married Prerna. Mohini tells him that marriage doesn’t happen this way.

He tells her that he has lost the mangalsutra. Komolika wants it some how. Mohini tells her that she will get a new mangalsutra for Sonalika. Komolika leaves the function. Moloy tells Mohini that he is aware of her plans to bring Anurag and Prerna together. He reminds her that Prerna is pregnant. She reminds him that Sonalika is Anurag’s wife now. He tells her that her inner humanity is ending now, since she isn’t considering Prerna’s pregnant state, Prerna should be happy in this state, which Mohini can’t tolerate. She asks him to understand her once, she wants her son to be happy. He feels she can never understand Anurag and Prerna’s true love.

Komolika gets mad in anger and wants to harm Prerna. She vents anger on an electrician. She gets an idea. She bribes him and asks him to make sure Prerna gets electrocuted. She wants Prerna and her baby to die. She wants them out of Anurag’s life. The man accepts her offer when she hurries up. She bribes him and asks him to just kill Prerna. Prerna talks to the pandit to assist him. Komolika complains about her to Nivedita. She asks Nivedita to just teach a lesson to Prerna and show her right place. She asks her to trouble Prerna by assigning some work. Nivedita doesn’t like it but agrees to her. Nivedita asks Prerna to get orange juice.

Prerna tells her that she always loved and respected her like a sister. This makes Nivedita feel guilty. Prerna gets busy in making the fresh orange juice. Komolika is happy that her plan will be successful. Prerna tells Anurag that she is busy in work. Anurag compliments her with much affection. Komolika watches them. She finds Prerna stepping in the water patch and still not getting any shock. Nivedita tells Anurag that she is regretting over her behavior towards Prerna. He tells her that she is also like Mohini, who is soft hearted. He tells her that they can rectify the matter by making orange juice for Prerna.

Nivedita helps Prerna in the work. She bonds with Prerna. Anurag is happy to see them. Prerna wants Komolika to get the shock so that she learns a lesson. She wants to prove that anything could have happened to her baby. She leaves the threat on Komoloika. Prerna watches Komolika playing evil. She had learn Komolika’s plan. Komolika goes to verify about the current wire. She gets the electric shock because of Prerna’s smart move. Prerna tells Anurag that Sonalika is inside the kitchen. She intentionally bears a little shock to see Anurag’s concern. Anurag worries for Prerna. He doesn’t care for Komolika, whom Nivedita rescues.

He gets protective about Prerna and their baby. She questions his feelings. He tells her that he likes to look after her. He thinks of his feelings like love for her. Anurag cares for her. He gets to the root of the problem since such big careless mistake can’t be forgiven. He enquires from the servants and learns about the electrician. Komolika fears that her name will be known and she will be badly caught up.