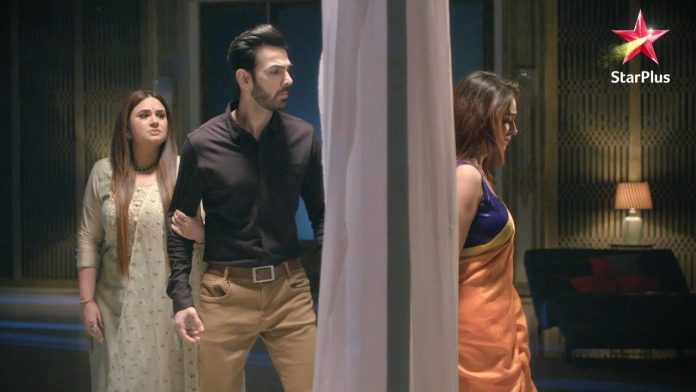 YRKKH Kahaan Hum Latest Promo Big twistsNaira avoids Kartik when he tries to confess love. He still doesn’t give up. He explains Naira that they are made for each other and her denial is wrong. Naira tells him that they have moved on in their lives. She reminds him the marriage with Vedika. Kartik doesn’t want to accept the marriage. He tells her that he will soon tell Goenkas about their relation. He expresses his love again and again. He wants Naira to not stop her feelings and accept his love. Vedika gets suspicious of them when Naira doesn’t let her see the video.

She follows Naira and finds her with Kartik. Kartik finds kiddish ways to convince Naira. Vedika happens to witness Kartik’s love vows to Naira. She cries that she fails to win Kartik’s heart. Naira feels Vedika’s presence around. Vedika tries to leave, and hits the side table. Naira tells Kartik about someone’s presence. Kartik doesn’t care at all. He wants to be with Naira, irrespective of what their relation get called. Kartik doesn’t care for Naira’s question, Yeh Rishta Kya kehlata Hai?

Rohit will expose Pari’s name in the scandal. Pooja will learn about her adoption. Sippys get against Rastogis. Veena also gets against Sonakshi because of Pooja’s sorrow. Sonakshi gets accused for ruining the Sippy family. Veena and Yash also withdraw their support. Naren tells that Sonakshi has shown her real truth. Yash asks Sonakshi to read her actions, her misdeeds and her truth. Sonakshi breaks down. She gets herself isolated from the family. Rohit tends to support Sonakshi, but Veena blocks his way. She doesn’t want Sonakshi to get a clean chit when her family is also involved in hurting Pooja’s heart.