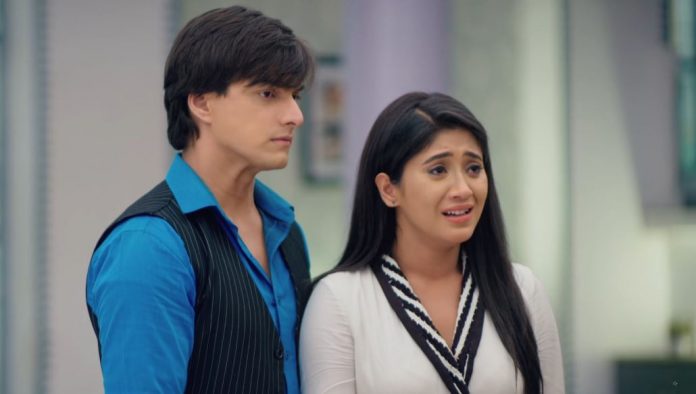 Yeh Rishta Starplus Kaira unite Vedika ultimate move Kartik and Naira share their feelings. Vedika learns about their wish to unite, though Naira is limiting her heart. Naira doesn’t want to hurt Vedika. Vedika thinks she won’t let Kartik do his wishful. She can’t afford to lose him. She goes home with Kartik. He wants to tell the family about his decision for Naira. Vedika worries just like Naira does. Dadi, Manish and Suwarna are also worried because of the complications in the family. They want to send away Naira. Kartik brings Naira home. Kairav is happy to be back in Goenka house. Kartik tells them that he wants to tell something really important for which he has no regrets.

He tells that he doesn’t want to cheat anyone again. Naira stops him from saying about them. He changes his statement. He tells about avoiding careless attitude in work. The family takes the matter light. Vedika knows that Naira won’t be able to stop Kartik for long. Kairav and Vansh ask their mothers to prepare the house model for the exhibition. Gayu realizes that she forgot the date. Kairav asks Vansh to take help from his parents. Vansh wants Vedika to help as well. Kairav tells him that three of them can’t make the house model together, since just a couple can make a house beautiful. He indirectly clears Vedika’s confusion.

Vedika is much stressed that she is unwanted in Kartik’s life. Kartik romances Naira, who restricts him. They have an argument. Kairav asks them to make the house soon and this time forever. Kartik wants to make their relationship stronger. Vedika imagines to vent out all her emotions in front of Goenkas. She ruins the house model while expressing her helplessness. She criticizes Kartik for never valuing her. She counts her favors on Kartik and Naira. She feels she is getting a punishment for loving Kartik. She insults Naira as part of her daydream.

She worriedly thinks that Kartik will really choose Naira. Vedika doesn’t want to lose Kartik this way, The family applauds Kartik and Naira for making a lovely house. Kairav compliments his parents. Vedika realizes that she has lost the pendant gifted by Kartik. She feels she has really lost Kartik forever. She goes to meet Pallavi. Naira wants to stop her. She learns that Vedika was hiding at the place suspected.

She tells Kartik that Vedika has really heard their confessions. She fears that Vedika may attempt to harm herself again. He doesn’t want to tell anything to the family. They worry for Vedika. Pallavi advises Vedika to not accept the wrong and claim her rights on Goenkas. She asks her to handle Goenkas and also Kartik. Vedika takes her advice. She wants to take a big step for everyone’s betterment. Naira gets panicking.

Kartik assures that they will find Vedika. Vedika makes a stormy entry and hands over the divorce papers. Naira can’t believe that Vedika is sacrificing her marriage. Dadi questions Vedika about her step. Vedika tells them that Kartik and Naira love each other and want to unite forever. She doesn’t want to come between the lovers. She reveals that Naira was leaving Udaipur for her sake.

She is grateful to Naira for trying so hard to go away. Dadi asks Vedika did anyone ask her to take this step. Vedika tells them that Kartik and Naira aren’t at fault, they were hiding their love but still its evidence that their love is true. She thinks she has tested her fate and failed. She wants to bring them together. She takes a good step to unite Kartik and Naira. Vedika keeps her esteem and leaves from Kartik’s life. Kartik and Naira happily unite while Goenkas also bless them. Vedika gets the credit for the good deed. Kaira romance starts again. He plans to propose Naira, while she thinks of taking some time before committing to him.