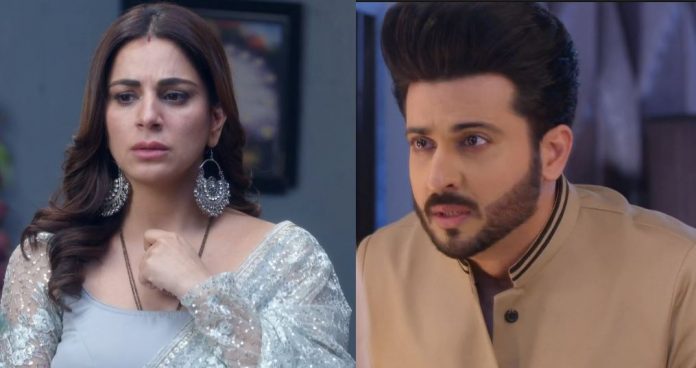 Kundali Bhagyya Today Shocking news for Preeta Shrishti doesn’t want Preeta to contact Prithvi. She gets fed up explaining Sarla. She wants to save Preeta’s life. She hugs Preeta and expresses her concern. Preeta calls Prithvi. She tells that Prithvi isn’t answering her calls. Sarla is glad to see her daughters’ bonding. She thinks they are managing the wedding hall. Janki doesn’t want Sarla to worry. Preeta learns about Karan and Mahira’s engagement. She is disheartened. Janki thinks that Preeta got much hurt knowing this since she loves Karan. She wants Karan and Preeta to unite. Shrishti arrives in the party to meet Karan. She wants to convince him that Preeta wasn’t marrying Prithvi.

She hides from Kareena. She rushes to Sameer to seek his help in breaking Karan’s engagement. He tells her that its not possible for him. She asks him to just help her in executing her plan. He doesn’t want to upset Kareena. She tells them that this won’t matter once Karan and Preeta unite. She tells that they will disappear the engagement ring. He denies to have any ring. She tickles him to find the ring. They have a moment. Ramona finds them close and misunderstands that they were romancing. Sameer gets speechless. He asks Shrishti to go away before Kareena catches her. He tells her about Ramona, Mahira’s mom.

She tells him that she will talk to Ramona to cancel the engagement. She knows Mahira is dying to get married to Karan. She thinks to meet Mahira. Karan wants Preeta to know that he is so happy to move on. He wants to call her and inform her about his engagement. Preeta wants to control her feelings. She feels she is responsible for her love and marriage. She doesn’t want to choose her one sided love. She gets helpless to her heart. She had accepted the relation heartily and gave a right to Karan to hurt her. Karan feels Preeta doesn’t matter to him. He wants to convey this message to her. He sends his happy picture to Preeta.

Preeta cries seeing his picture. He wants her to react. He thinks his happiness might hurt her. She is happy to see him happy. She feels he is really bad to discard her love. They chat to argue. She threatens to block his number. He panics thinking she has really blocked his number. He connects to her in desperation.

He threatens to delete her number after his engagement for Mahira’s sake. Mahira gets angry on the beauticians. Shrishti finds some way to meet Mahira. Preeta turns restless when Karan’s message gets deleted by mistake. She doesn’t want to run after him. She allows him to move on with Mahira. Karan and Preeta feel the pain of separation because of their foolish ego.