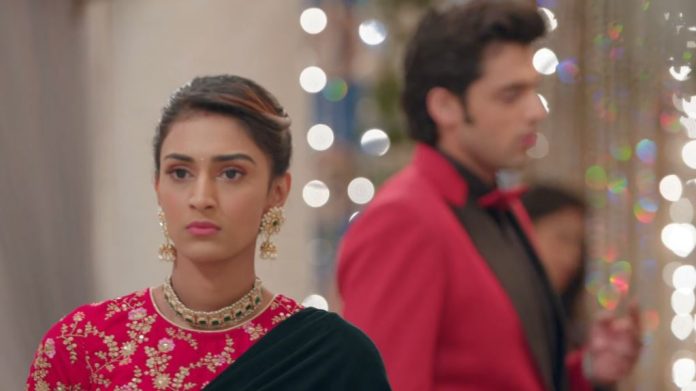 Kasauti Starplus Huge twists for Anurag Prerna There is a huge drama because of Mohini and Veena’s ugly argument which goes to the extreme level when Mohini mentions that Prerna is carrying Bajaj’s child in her womb. She tells Veena that Anurag never mentioned that Prerna is pregnant with his child. Veena and Shivani also stand as a strong team against Mohini and Nivedita. Veena was willing to come in the party. She clears to Mohini that she had to come only for Anurag’s sake. Shivani tells that Mohini will never change. Nivedita interrupts to control them. She supports her mum, who speaks ill about Prerna. Mohini tells them that Anurag was going to marry Prerna but never shared the news of her pregnancy.

She can’t accept that its Anurag’s child. Veena tells Mohini isn’t fortunate to see her grandchild after child. Mohini doesn’t think Prerna is carrying her family heir. She has no interest in knowing about the baby. Veena promises to keep the baby away from Basu family. Mohini and Veena’s heated argument hurt their hearts. Mohini swears to throw out Prerna. Veena wants to go home. Komolika intentionally provokes Prerna so that Prerna comes in Mohini’s sight.

Anurag introduces her as his wife, which makes Prerna feel sad. Komolika tells Prerna that Anurag will soon accept her as his wife heartily. She makes a plan by which Anurag will lose his trust and never believe Sharma family. She plans to trap Prerna in theft case. Veena tells Prerna that she wants to leave from the party, since she isn’t comfortable.

Prerna also thinks to go home with her by ending her work fast. Veena gets helpless to wait for Prerna. Anurag gets a chance to rush to Prerna’s house and spy to find about her husband. He thinks its surely some secret and maybe he had met that person. He wants to find the truth so that he can help Prerna. Shivani stays with Veena to protect her from humiliation. They don’t tell Prerna about Mohini’s insulting remarks. Anurag hides from Shekhar, who had returned home on the same day. He doesn’t want Shekhar to see him.

He goes inside Prerna’s room through the balcony window. Suman hears some sound and checks around. Anurag hides from the room. He finds a pin to unlock the cupboard. He wants to find details of Prerna’s husband. Mohini and Nivedita look for Anurag. They call Anurag, and learn that he had gone to the office to get documents. Prerna tells him that the papers are inside the cash suitcase. He trusts her and asks her to keep papers with her.

Nivedita instructs Prerna. Komolika insults Prerna for being a servant. Prerna corrects her that Anurag trusts her a lot. She doesn’t care what Komolika feels. Mohini catches Prerna with the important documents. She targets her with doubt. She expresses her dislike. She asks her to leave Anurag forever. Prerna tells her that its not possible to leave Anurag.

She reminds Mohini’s acceptance at the time of marriage. She asks Mohini if she wasn’t happy at that time. Mohini reminds Prerna for the marriage with Bajaj. She reprimands Prerna. Prerna gives her a firm reply that Mohini had sent her to meet Bajaj with a request to save Anurag from jail. She tells Mohini that she had married Bajaj to save Anurag’s future. She counts her favors to give an answer to Mohini. Mohini chooses Sonalika as her Bahu.

She doesn’t want to listen to Prerna. Komolika frames Prerna for the theft. She gets Mohini on her side. Mohini and Komolika get Prerna arrested. Prerna knows that Anurag will never let her face troubles. Anurag gets close to see the picture of Prerna’s husband. He will be seeing their engagement pictures and connecting with Prerna. He will rescue Prerna once again. Will Anurag recover his memory? Keep reading.