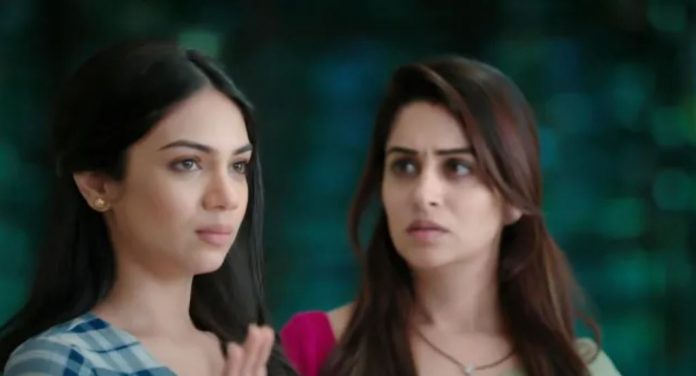 Kahaan Hum Starplus Pooja makes shocking declaration Nishi blames Sonakshi for Pooja’s state. Nishi tells them that she has come back immediately after knowing about Pooja. She doesn’t want Pooja to feel lonely, when her entire family is with her. She warns Sonakshi against stealing Pooja from Sippys. She thinks Sonakshi is brainwashing Pooja so much that Pooja started hating them. She tells that Sonakshi had leaked the sensitive news about Pooja’s adoption to shatter the family. She gets angry on Sonakshi for not thinking about Pooja. She asks Sonakshi how could she back stab them. She tells Pooja that she loves her a lot. She wants Pooja to never attempt suicide.

Pooja tells her that she will never try such things again, but she doesn’t like anyone from the family. She tells that she isn’t related to anyone, who lied to her about her existence. She feels that the family who taught her about honesty, bravery and truth have cheated her badly today by not trusting her and keeping the truth to themselves. She feels she had a right to knew that she is adopted, so that she could keep terms with her real parents. She gets curious to know her real parents. She didn’t wish to live with foster family. Pooja’s indifference shatters the family. Pooja refuses to connect with Nishi, Yash or anyone in the Sippy family.

She just wants Sonakshi with her. She is happy that Sonakshi is true to her. She thanks Sonakshi for revealing her life’s biggest truth. She just wants Sonakshi to be with her. She doesn’t want her family with her. She asks her to tell everyone to get away. She gets hyper and wants Nishi and Yash out. Nishi breaks down in tears. Sonakshi didn’t think this would happen. Rohit recalls Sonakshi’s advice that they shouldn’t hide truth from Pooja. He regrets whatever happened. He just wants Pooja to recover soon. He asks the family not to give stress to Pooja and leave from the ICU. Sonakshi stays back with Pooja to pacify her. Rohit assures that he will get Pooja home without letting the media know about it. He sends his family home.