Kumkum Bhagyya Abhi receives a shocking news Sanju gets a huge shock on seeing Prachi’s picture sent by Mane. He doesn’t want Mane to take this step. He calls Mane desperately to save her. He has done a lot to get Prachi. He doesn’t want him to kill Prachi. He rushes to stop Mane. Sarita asks Shahana about Prachi. Shahana worries for her health. Sarita wants to ask Pragya about it. Shahana asks her not to take tension. She tells that Pragya has gone to the police station since Prachi is missing. Sarita also wants to go to the police station and support Pragya. Sarita is much worried for Prachi. Shahana locks her in the room so that Sarita doesn’t go anywhere. Sarita shouts on her.

She calls Abhi with a ray of hope. She tells him that she is worried for Prachi, who didn’t reach home from office. She asks him to go to the police station and help Prachi’s mum there. She tells that Shahana isn’t letting her go out. He accepts her request. He is also worried for Prachi. She thanks him for all the help. Rhea learns about the threat on Prachi. Pragya and Ranbir reach the police station to file the missing report. Inspector asks them to check at nearby places. He asks Ranbir if he is Prachi’s boyfriend. Ranbir gets speechless.

He wants Inspector to take action. Pragya tells him that the matter is serious since Prachi haven’t returned home since few hours. Inspector asks them to wait for some time, since he can’t take action so soon. Pragya tells him that Prachi is in some danger. Ranbir tells the odd occurrences. Inspector asks them if they doubt anyone in this matter. Elsewhere, Mane tells Prachi that she has to die somehow since they are paid to kill her. She bribes them to save her life. She tells them that she wants to know about the person who hired them.

Rhea analyzes that Prachi is missing. She suspects that Sanju has kidnapped her. She shares her tension with her friend. She wants Abhi’s love and attention. She doesn’t think Prachi deserves Abhi’s attention. Sarita jumps out of the window to go out. She is angry that she had to do this because of Shahana. Prachi asks Mane and Guddu to tell them about their boss. She promises to pay them double amount. Mane and Guddu think its a good deal since Sanju isn’t related to them. Mane doesn’t want to cheat his client. Prachi thinks to run away when the goons are away. Sanju reaches to save Prachi. He meets Mane and asks him not to harm Prachi.

Sanju asks him if Prachi is alive. Mane tells him that he will kill Prachi. Sanju takes him at gun point. He apologizes to Mane. He tells him that Prachi is his love, he can’t lose her. He asks Mane not to kill him by killing Prachi. Rhea calls him to know if he has kidnapped Prachi. Sanju and Mane have a discussion. Rhea wants to trouble Prachi all life and doesn’t want Sanju to marry Prachi to take her away. Mane asks Sanju why did he ask him to kill Prachi. Sanju apologizes to him. Mane tells him that he can’t leave Prachi now. Sanju didn’t know about her identity. Mane fears that Prachi will go to the police and take their names.

Sanju is ready to go to the jail to save her life. He reminds Mane his emotional pity. He feels helpless. He tells Sanju that Prachi has seen him murdering Sunil. He tells that Prachi is already doubting on him for getting Sunil killed. Sanju tells Mane that Prachi can’t know it, its cheating to back stab him. Sarita reaches the police station to meet Pragya. She wants to find Prachi. Pragya tells Sarita that Inspector promised to investigate the matter. Sarita gives her hope. She tells that she has informed Rhea’s dad to take help. Pragya is ready to any help to find her daughter. 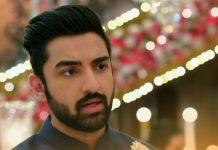 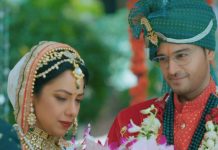 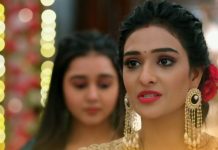