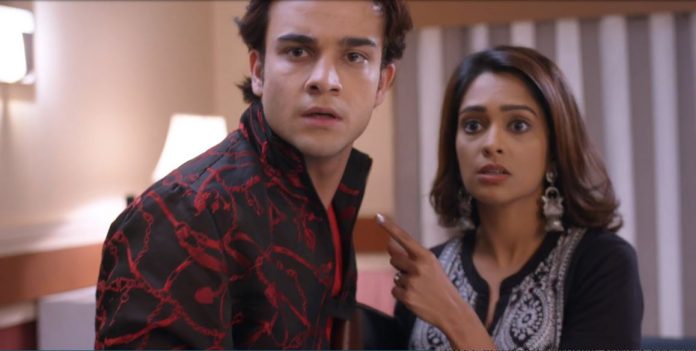 Kumkum Bhagya Unexpected Shockers Prachi Ranbir Ranbir and Rhea share a moment and confess their feelings. Rhea tells him that she accepts him as her boyfriend. Prachi interrupts them and reminds Ranbir his meeting. Prachi and Rhea have an argument. Rhea asks her to have manners while talking to her boss. Prachi tells that Ranbir is also her friend. He asks her not to argue with Rhea. He scolds Prachi just to save her from Rhea’s anger. Prachi gets frustrated. She gets jealous seeing Rhea with Ranbir. The office staff talks about Ranbir and Rhea. They also think that Ranbir likes Prachi. Ranbir and Rhea go to the bank. Rhea asks him why is he driving slow.

He tells her that he is driving safe since Prachi always wants such. He doesn’t want to become like Prachi. She gets fed up on hearing him chant Prachi’s name. She thinks to drop the plan. She doesn’t want to lose Ranbir. She wants to be with Ranbir all the time, so that everyone feels he loves her. She doesn’t want Ranbir to fall for Prachi. Ranbir asks Rhea not to lie to him and share her thoughts. Rhea doesn’t want to tell anything. She takes her time. Prachi learns that Ranbir has left his important documents. She rushes to the bank to give the documents to him.

Some goons are already present at the bank with a plan to rob. Ranbir and Rhea fall in trouble. They come into the sight of the onlookers. Rhea wants to give an answer to her friends. She wants to call them and show them the reality that Ranbir loves her. The goons try to enter the bank. They fool the guard and catch him. The goons manage to enter the bank, while Prachi too arrives there. She finds the guard unconscious. She feels something is really wrong. Rhea gets into an argument with her friend Dimpy. She claims that Ranbir loves her. She scolds her for not trusting her. Prachi meets Rhea and tries to take her out of the bank.

She informs about the big trouble. Rhea doesn’t believe her. Prachi tells her that the security guard is lying unconscious. She tells that she came to give the file to Ranbir but got to know the attack plan on the bank. Rhea asks how can she predict the bank robbery. She asks Prachi to find Ranbir. Prachi warns her. Rhea thinks she is faking the story just to be with Ranbir. The goons get ready to strike. They take the disguise. Prachi informs the police about the possible bank robbery. A constable is also at the bank. He doesn’t think so.

Inspector speaks to Prachi to confirm the news. He asks her not to lie else it will be a case on her. He doesn’t believe her. Ranbir speaks to the bank manager. Prachi tries to call him and inform the danger. She tells him that she has also come to the bank. Prachi informs Ranbir to come with her. Ranbir and Prachi argue. She tells the manager that the bank is under attack. It gets too late since the robbers take over. They take the manager captive.